Home Business Hertz and other companies declare bankruptcy—majority rally regardless

Is bankruptcy a current trend for the markets nowadays? Hertz could be a good example of such movements leaving some investors puzzled.

Earlier this week, some U.S. companies have recently filed for bankruptcy. Usually, whenever a company files for bankruptcy, it spells bad news for investors.

However, the surprise movement from Hertz could prove otherwise. Even the Twitter universe doesn’t understand why this happened with the car rental company.

“But as long as everyone out there is having fun trading, we won’t begrudge them that.”

Going bankrupt seems to generate a “positive sentiment” to some

Just when Wall Street thought that the 2000% rally from Genius Brands is already impressive, some more unexpected movements came along.

It’s not just Hertz that is experiencing this trading anomaly—Whiting Petroleum, J.C. Penny, and Pier 1 are also receiving this market euphoria. A quick peek in their charts suggest that starting June 1, their rallies have already exceeded over 200% despite receiving pullbacks yesterday. 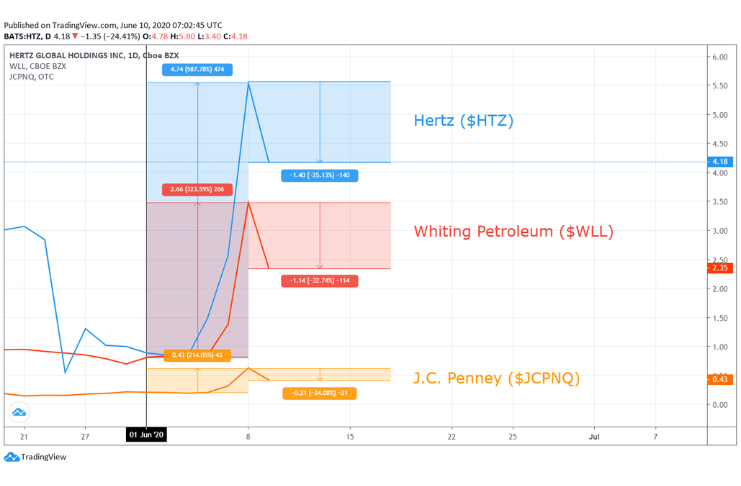 Meanwhile, Pier 1 still maintains its market rally despite the bad news, with its stock price rising almost 500% since May 21. 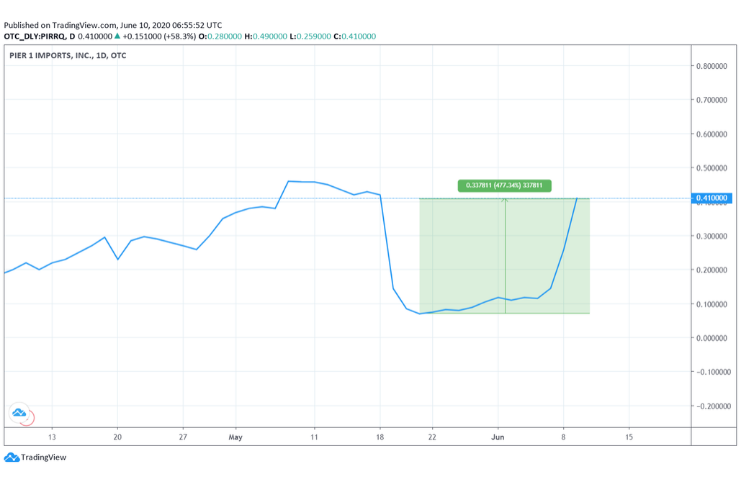 However, the probable cause why these companies are suddenly surging is due to the overall sentiment that Wall Street is experiencing, which is another euphoric rally in the works.

This week, CNBC Mad Money host Jim Cramer posted a tweet to its followers, hinting to be cautious about the car rental company, Hertz, as well as the U.S. natural gas giant, Chesapeake.

Julian Emanuel, a chief equity and derivatives strategist at BTIG, called the speculative Wall Street comeback as a sign of “euphoria” he last saw before the burst of the tech bubble as he tells CNBC’s Squawk Box:

“Something we really never think we’d see but we saw yesterday — Buying hundreds of billions of shares of bankrupt companies, sending their shares 100%, 200% and 300% […] It’s sort of this speculative behavior that we saw at the end of 1999 and the beginning of 2020. It really doesn’t make rational sense.”

Aside from Hertz and the other mentioned companies, Chesapeake is preparing for a potential bankruptcy.

In addition, the shale company is currently negotiating a restructuring support agreement that could see holders of its so-called FILO term loan take a majority of the equity in bankruptcy, according to sources from Bloomberg.

News from the New York Times also reported that despite Chesapeake’s successes at using hydraulic fracturing to produce gas to help the U.S. become a major global exporter, the company plunged themselves in massive debt.

The stock price of Chesapeake immediately plunged to over 66% yesterday from its 400% rally since June 4 after the news came out. 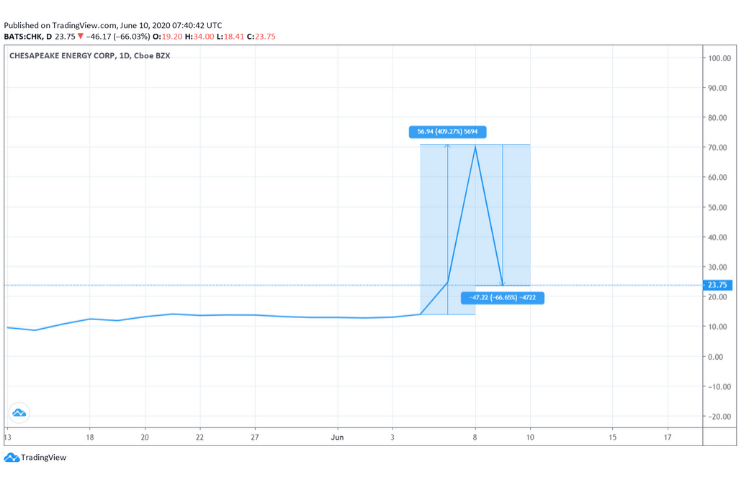 Wall Street has once again shocked investors with these short-term rallies that were provided by Hertz and the other companies, and its business relationship with China is still in peril.

Stock futures are currently rising as Wall Street anticipates another Fed announcement, which will determine the fate of the U.S. markets.