CoinDesk is reviewing its policies after falling for a hoax about a fake, drunk CEO ‘quitting’ because he was ‘not going to jail for this’.

The user was not directly masquerading as Livingston, instead using the handle “Ted E Bear” with a picture of Livingston.

But contacted by the reporter and presented with the opportunity to make mischief, the user ran with it.

Real news: the Kik app is closing down

CoinDesk was seeking comment on a genuine breaking news story about the Kik encrypted messenger app – which had 300 million users at its peak – being shut down.

The company is engaged in an expensive legal battle with the US Securities and Exchange Commission (SEC) over its ‘illegal’ 2017, $100 million Kin token ICO, which the SEC believes is a security.

Drained of resources to fight the case, the company has just announced that it is downsizing from 100 people to just 19, and will put all of its resources into developing the cryptocurrency.

The layoffs and change of direction aim to stem the company’s losses by 85% to enable it to get through the court case.

CoinDesk explained its reporter had tried to contact representatives of the company and located a Telegram user with Livingston’s likeness and interviewed him instead.

“In response to questions about the incident at the company, the account provided what appeared to be official statements on the news that Kik is shutting down,” CoinDesk said.

Well, that’s one way of putting it. Another way is to say the Telegram user got very creative and pretended to ‘mistakenly’ send messages while drunk to reporter William Foxley, that were ‘meant’ for board member William Mougayar.

The messages – quickly deleted to make them seem even more authentic and juicy – read:

“Will, I know I’ve been drinking, but this ain’t the drink talking, I’m [fed] up with this shit.”

“We’ll talk more in the morning about replacement, but I quit.”

“I have my ticket. I’m not going to jail for this.” 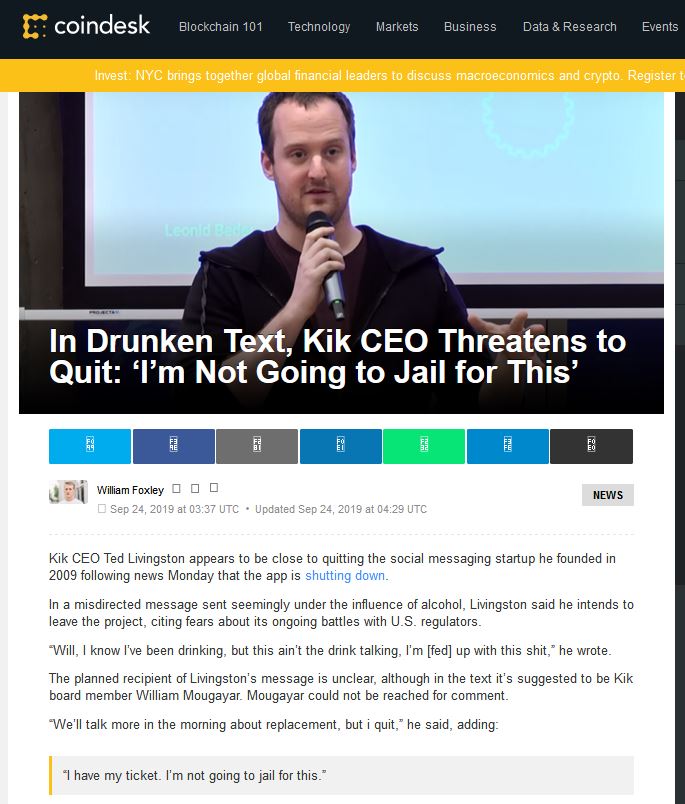 The story, which also incorrectly stated the Kin Foundation was shutting down, was picked up by other outlets, including mainstream British newspaper The Evening Standard.

The hoax came to light soon after when the real Ted Livingston got off a 12-hour flight to Washington and tweeted the story was completely untrue:

I just landed in Washington. I took off from Tel Aviv 12 hours ago. This is obviously fabricated. I’m not sure how Coindesk could make such an obvious mistake, but we’ll find out https://t.co/SjL9wMVGkp

The publication was forced into a retraction and made a public apology for the story.

Editor in chief Pete Rizzo – who today announced he was leaving CoinDesk (for unrelated reasons it seems) – apologized personally.

Likely the first article we've ever fully retracted in my nearly 7 years at @coindesk.

We'll be evaluating deeply in days and weeks ahead.

Our sincere apologies to @Kik and @ted_livingston and my thanks to team members who admitted fault and worked professionally to correct. https://t.co/ep4dyEPJxQ

Following publication of the story Telegram user “Ted E Bear” changed the account name to R Mo, with an image of the Magic Internet Money Wizard, and posted:

“Dude you gotta pull that story. I’m not Ted, never claimed to be. You assumed. Just an internet member of a decentralized unofficial comms channel. That is a fan channel that sh*tposts not the kin channel.”

CoinDesk said it was reviewing its reporting guidelines for online tools and forums in light of the incident. 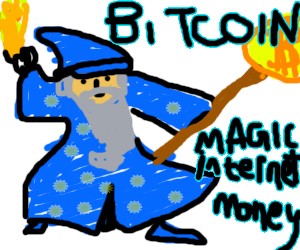