Home Blockchain Is Bitcoin 60% undervalued in relation to the hashrate?

A new model examining the relationship between hashrate and price suggests Bitcoin could be massively undervalued.

The Bitcoin hash rate topped 100 exahash for the first time this week.

To put it another way, that means that mining computers in the Bitcoin network are collectively performing a ludicrous 100,000,000,000,000,000,000 calculations per second in a race to win the next block reward.

The hash rate looks like its gone ‘parabolic’ this year and to put it into context, the rate was just six exahash in September 2017.

Many interpret this as a bullish sign – after all, why would miners keep throwing money at new equipment unless they believed the Bitcoin price will go up?

The #Bitcoin hash rate is starting to look almost parabolic.

Hash rate goes parabolic – what about the price?

The increase in the hash rate has been attributed to cheaper power prices for mines in China (due to seasonal rainfall making hydro power more affordable) and the release of more powerful new ASICs used to mine Bitcoin.

The relationship between hash rate and network security is well known – the higher the hash rate the more prohibitively expensive an attack would be.

But there’s less agreement on the relationship between hash rate and price.

Late last week CZ from Binance tweeted: “Hashrate increase means more miners and investing in BTC, they are bullish. You know what follows?”

And permabull Max Keiser has frequently reiterated his belief that price follows hashrate.

Earlier this month he linked the figure of 90 exahash to a $28,000 Bitcoin price “per protocol’s hard coded Game Theory”.

Interpreting it as a bullish sign makes sense, however …

However the relationship between hashrate and price is certainly not in lock step.

As many people have pointed out, the hash rate continued to increase throughout 2018 even as the Bitcoin price tanked.

The analysts at CoinMarketExpert have just produced a new analysis looking at the relationship between hashrate and price since 2015 and come to some interesting conclusions.

They noted the link broke down during bubbles and crashes as fear or greed took over, but the relationship was reestablished as markets returned to stability.

“The price of BTC in USD seems to be a leading indicator, rising ahead of the actual increase in the Hash Rate,” they wrote. 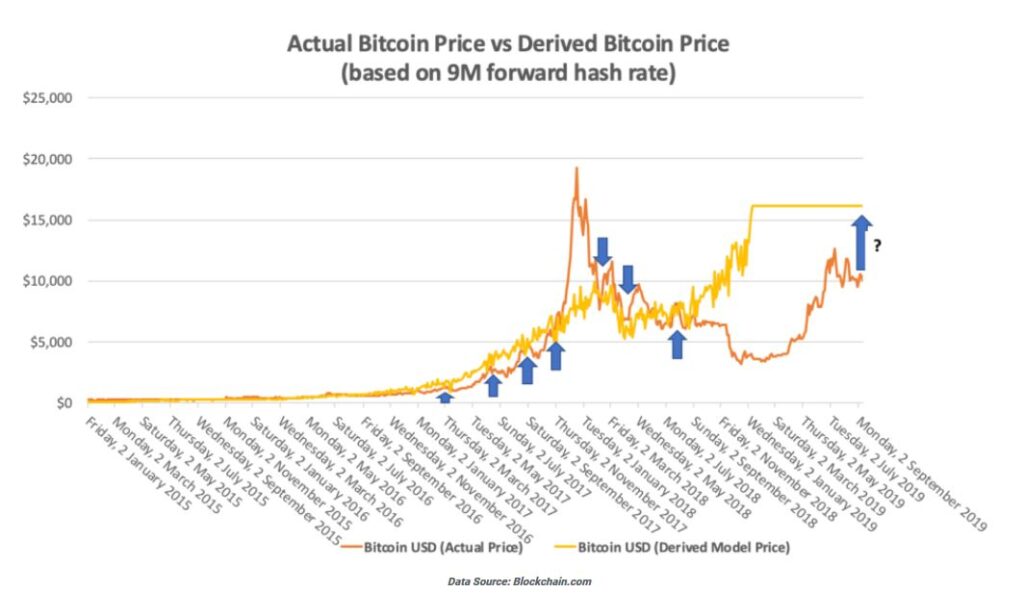 OK, how is that useful?

It figures that if the USD value of the block reward increases, the more resources miners will invest into trying to win the next block reward.

The lag is about nine months historically speaking. However, what’s the point in predicting the hash rate from the price? We want to predict the price from the hash rate.

The CoinMarketExpert report argues their analysis of the hashrate/price is still useful for price predictions, commenting:

“Let’s put it this way. If demand for premium priced smartphones is rising, then wouldn’t you expect the company producing those smartphones to be fundamentally stronger at the end of the year (all else equal)?

“And wouldn’t you also expect improving fundamentals to be reflected in the share price?” 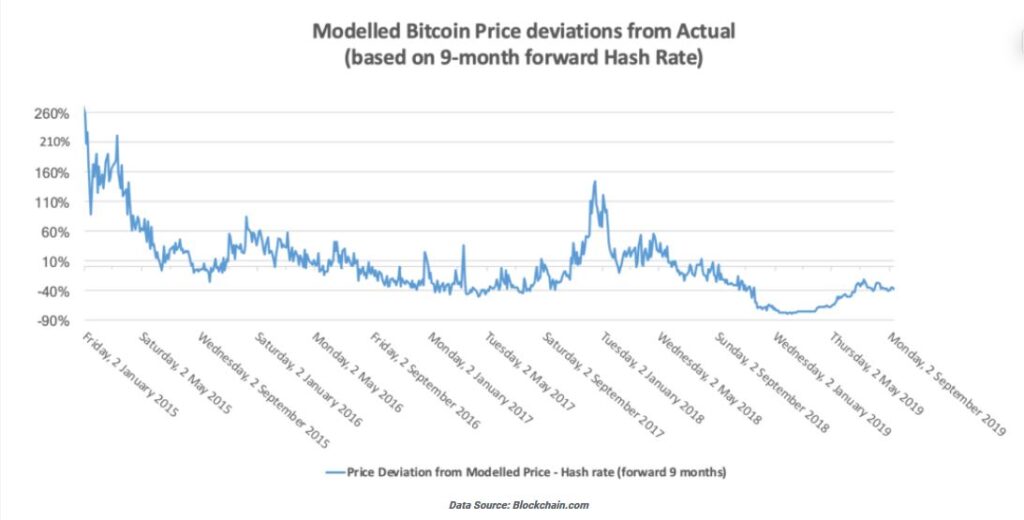 Enough explanation, get to the conclusion

They have developed a model using the forward nine month hash rate and compared it with historical records since 2015.

“Assuming the model still holds, it would appear the price of Bitcoin remains at least 60% undervalued based on the current hash rate of 100 million.

“Based on the model we have developed the fair value of Bitcoin could equate to $16,432 (or higher if the hash rate is above 100 million in 9 months time). ”

Hashrate will only increase

Bitmain has just released two new miners the Antminer S17e and the T17e.

The S17e is 8 percent more energy efficient and 40% more powerful than the best miners available in quarter 2 this year.

A report from TokenInsight earlier this month showed that the price of miners has also doubled since the last quarter, as supply struggles to keep up with demand.

It seems likely the only way is up for the hashrate from here.