Jamie Foxx, allegedly, flirted with Julia Roberts while he and Katie Holmes were still dating.

According to Now to Love, Foxx and Julia Roberts flirted at Denzel Washington’s AFI Life Achievement Award Ceremony in Los Angeles last year. A photo of Foxx and Roberts made headlines following the event. The tabloid claimed that the two are exchanging compliments in the snap. However, no concrete pieces of evidence can confirm that these hearsays are correct as of this writing. 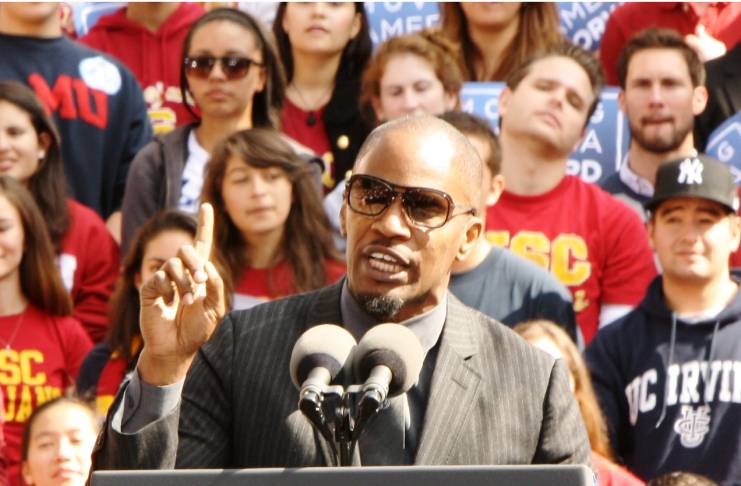 An unnamed source told the tabloid that Foxx couldn’t take his eyes off Roberts that night. And the actress, allegedly, loved the attention and flirted back. The insider also claimed that Foxx slipped his arm around Roberts’ waist before whispering something in the actress’s ear.

Since Foxx and Holmes were still together then, the unnamed source claimed that the Dawson’s Creek actress was upset over her boyfriend and Roberts’ connection.

The source said that Holmes wanted Foxx to steer clear of Roberts because she didn’t want to compete with the latter for Foxx’s attention. Unfortunately for Holmes, her pleas, allegedly, fell on deaf ears before Foxx continued to pursue Roberts.

However, one should take the claims made by the tabloid with a grain of salt. According to Gossip Cop, Foxx didn’t flirt with Julia Roberts at the award ceremony last year. It is also important to note that Roberts is still with her husband, Danny Moder.

Is Julia leaving her husband for George Clooney?

This isn’t the first time that the actress is rumored to be dating another celebrity. Roberts was also previously linked to George Clooney.

Last year, National Enquirer reported that Roberts was leaving Moder to be with the Ocean’s Eleven actor. An unnamed source claimed that after a 16-year marriage, the couple was heading for a $245 million divorce. However, no concrete pieces of evidence can confirm that these hearsays are correct as of this writing.

But the unnamed source insisted that Roberts fell in love with Clooney because he has always given the actress a shoulder to cry on. Following Roberts’ decision to leave her husband, she, allegedly, ran to Clooney first out of all her friends.

And since Clooney and Amal are together, the human rights lawyer is, allegedly, not happy with her husband and Roberts’ connection. However, Amal has nothing to worry about because Clooney and Roberts are just friends.