Comedian Joe Rogan just landed a huge deal with Spotify, and it could change the landscape of content creation as we know it.

Joe Rogan’s massive Spotify deal could be a deal of the century for podcasters, as well as other content creators.

This comedian, MMA commentator, and podcaster is now the world’s highest-paid broadcaster.

The Wall Street Journal reported that the popular podcaster just sold his 11-year-old show, The Joe Rogan Experience series, to music-streaming provider Spotify in a licensing deal worth US$100 million [AU$ 152.80 million].

Announcement: the podcast is moving to spotify!
Starting on September 1 the podcast will be available on Spotify as well as all platforms, and then at the end of the year it will move exclusively to Spotify,… https://t.co/7IRHET5eZo

This deal would also give Joe Rogan creative freedom over his podcasts, and Spotify is willing to let its listeners and viewers stream it for free.

While Wall Street is still unsure of what the future holds for the markets as a whole, it looks like Spotify is acting like one of the outliers for this market.

Spotify broke stock market charts when the news came out

Patrick Bet-David, the founder of Valuetainment, broke down what the deal would mean for the entire content creator community around the world.

When the news of the deal came out, Spotify broke the charts in the stock market. The chart below shows how Spotify’s stocks skyrocketed almost 20%, following suit with other tech companies. 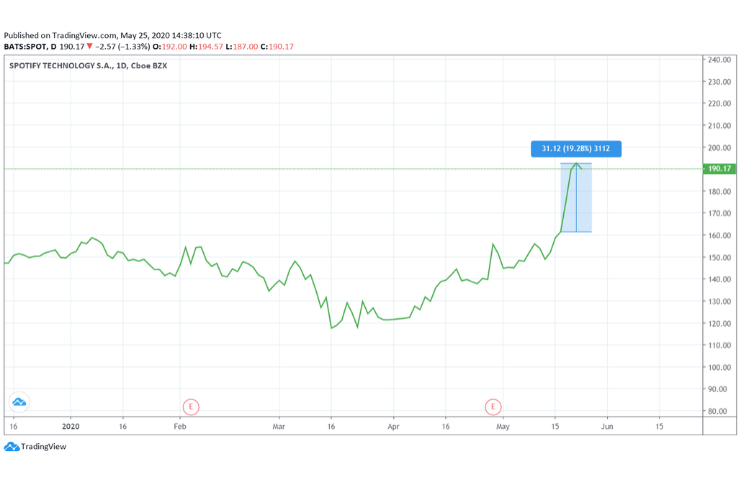 Meanwhile, Spotify recently made over $3 billion in sales amid the COVID-19 pandemic.

Would Joe Rogan’s influence be enough to topple Spotify’s competition?

Rogan announced on his Instagram that his show will be moving to Spotify starting September 1. However, viewers can still watch his videos on YouTube until the end of the year.

Announcement: the podcast is moving to @spotify! Starting on September 1 the podcast will be available on Spotify as well as all platforms, and then at the end of the year it will move exclusively to Spotify, including the video version. It will remain FREE, and it will be the exact same show. It’s just a licensing deal, so Spotify won’t have any creative control over the show. They want me to just continue doing it the way I’m doing it right now. We will still have clips up on YouTube but full versions of the show will only be on Spotify after the end of the year. I’m excited to have the support of the largest audio platform in the world and I hope you folks are there when we make the switch!

At this rate, with Spotify slowly introducing videos on its platform, the music-streaming giant might dethrone YouTube. Other famous podcasters could join the bandwagon sooner following the recent deal.

This will go down in history as the beginning of a podcast revolution, with Joe Rogan taking the lead.