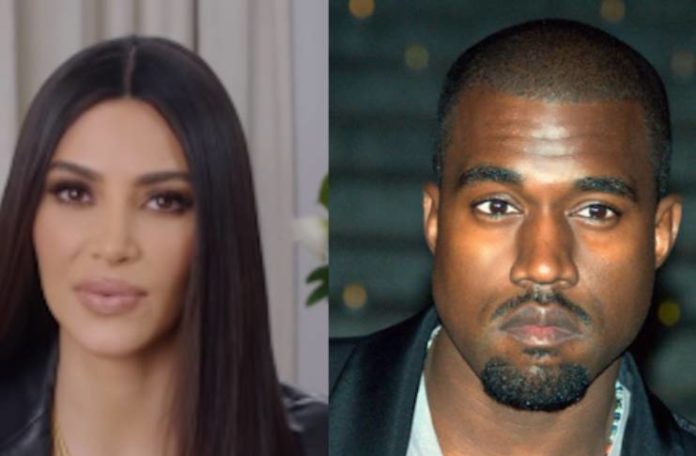 Kanye West is allegedly bragging that his wife, Kim Kardashian, doesn’t have the guts to push through with their divorce, one tabloid claims.

Kanye West and Kim Kardashian have remained amicable after their split. The pair announced their separation in January. The Keeping Up With the Kardashians star filed for divorce in February. However, Kardashian allegedly has internal struggles with the divorce.

An unnamed source spoke with Globe and claimed that Kim Kardashian is torn between raising her kids in a broken home and making things work with Kanye West.  The insider added that there was no more attraction between the exes.

However, the Gold Digger allegedly “still has a way of manipulating and mesmerizing Kim.” Kardashian’s pals and family are allegedly against her getting back with West. Her friends even think she is crazy to contemplate rekindling their romance, the tipster said.

West was feeling “smug” that he and Kardashian will be together again because of their four kids.

Gossip Cop examined the report and noted that things between Kanye West and Kim Kardashian are messy. However, if there is one thing that concerned Kardashian at present, it’s probably her son who broke his arm and not her relationship with West.

The rumor-debunking site also questioned the outlet’s insinuation that Kardashian would want to make things work with West after she filed for divorce. The outlet noted that things are up to the couple and it won’t believe the report unless West or Kardashian will confirm it.

Latest update about the couple

Kim Kardashian and Kanye West have remained amicable after their separation. The pair co-parent their four children North, 8, Saint, 5, Chicago, 3, and Psalm, 2.

An insider told Entertainment Tonight that Kanye West wanted to rekindle his romance with Kim Kardashian. He has been trying to win over her, the tipster added.

The tipster added that Kardashian and West have a deep love for each other. They have lots of amazing memories that are difficult to let go of. No matter what, her main focus is her children and she wants to do what’s best for them.

Kardashian was present at the listening parties West had for his album, Donda. She even wore a wedding dress when she showed up at his Chicago event. They also sparked reconciliation rumors because they were spotted holding hands while leaving the event.

‘WarioWare’ and ‘Tales of Arise’ top the UK sales chart

‘Pokemon Go’ fashion week will include Pokemons from all three generations