More than 20 years ago, Magic: The Gathering became the “in” thing among card gamers. Of course, there are still players who prefer card games like poker, solitaire, baccarat, and so on, but it’s time to play a different card game where collecting cards became a player’s strongest weapon.

After that, “Yu-Gi-Oh!” came out, and kids began collecting cards as a hobby and then playing against other children in a battle of wits and strategy. The ultimate prize is getting a card of the winner’s choosing from their opponent. Fast forward to a few more years, and card battles entered the online arena. Hearthstone became one of the staple games when CCG’s are concerned.

However, the players wanted more. They wanted to learn more about the story within the card game. What better story to tell than the heroism of the soldiers that fought in WWII? That is what the makers of Kards aim to do. This relatively new card game got officially released today, but it was on early access since last year. 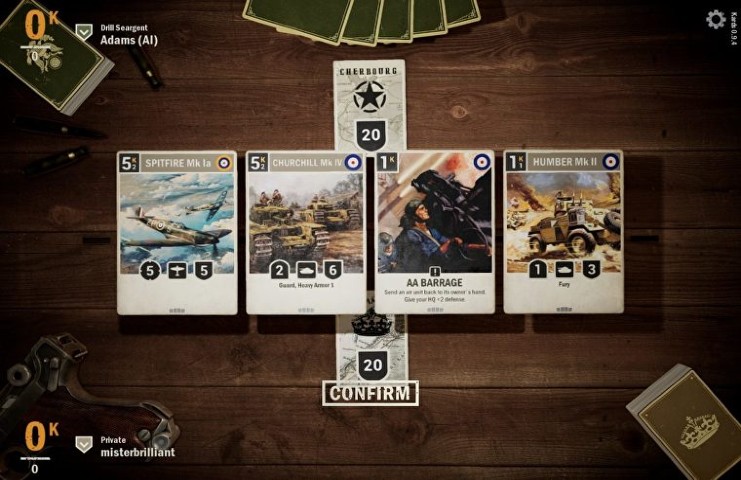 When a player starts to play Kards, they will receive a tutorial about the basic mechanics of the game then allow them to choose the country they want to represent. Each country is a major player in the Second World War: US, UK, Japan, USSR, and Germany. A starting deck will be provided to the player from the country they chose; then, they can fight against other countries in Solo Play. If they win, access to the defeated country’s deck would be available to them.

Sounds easy? Not really. Even though it’s just a tutorial, the player will face challenges and need to strategize their moves to win. It is just the introduction, though. A different challenge awaits the player once they go head-to-head against another player. They can only have one nation as their ally. It does not stop the player from creating decks from two different countries that didn’t ally with each other in the war. A good example is building a deck with cards from Japan and the US.

The game is all about PVP. It’s about butting heads and using strategies against their opponents. Like other CCG’s there are standard PVP matches for casual gamers and ranked/tournament-level games for the competitive ones. The game also has a leaderboard that ranks every player. Each player will receive a reward monthly based on their overall performance and rank on the leaderboards.

Everyone likes to pick their brains when playing a card game. It makes them think and apply rational decisions in every move, as the officials did in WWII. So if playing Resident Evil or Final Fantasy VII is boring, try playing Kards. It is indeed an enjoyable game with a rich history.