Federal Court documents reveal the details of the court action the leadership team has blamed for the collapse of Horizon State.

Company co-founder Oren Alazraki – who was replaced as CEO by former CTO Nimo Naamani in February – has taken Horizon State to the Fair Work Commission alleging a “breach of terms and conditions”.

The matter was filed on July 3 and Victorian Federal Court Justice Kenny yesterday ordered the parties into mediation on September 30.

The order was made at 11.15am according to another document. 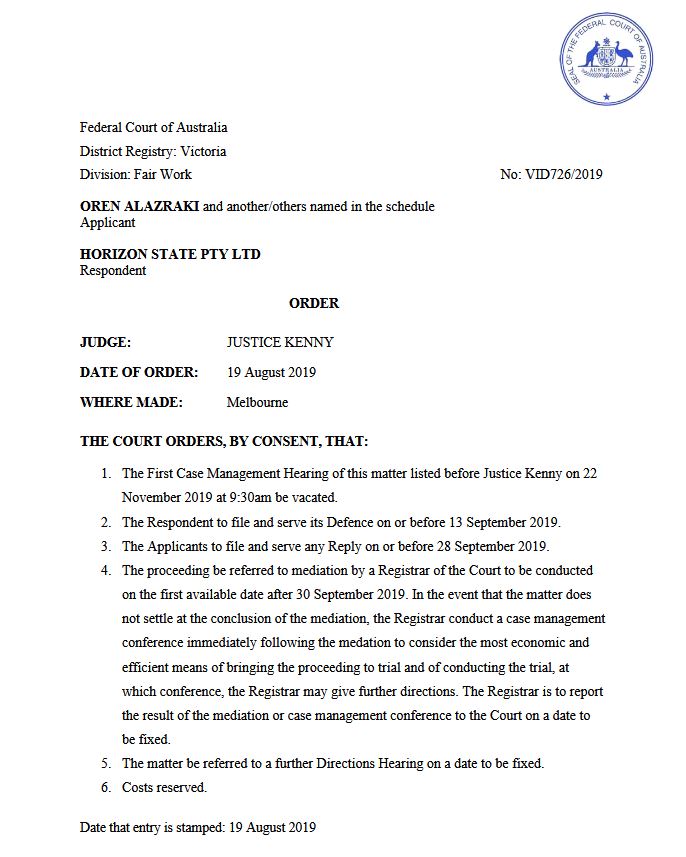 Instead of pursuing mediation, Horizon State announced within minutes it was ceasing operations immediately and pulled down its website.

They said the “eye watering” cost of defending the case would be too high given the funds they have available.

“The estimated costs to challenge this case, and potentially proceed through the mediation process to reach a settlement is an eye watering expense that will see this business become insolvent and ultimately force its closure,” the statement read.

The documents do support the notion this situation had developed quickly, with Horizon State only appointing a lawyer to act in the matter on August 7.

Value of HST plummets – but not to zero

The decision wiped off half the value of Decision Tokens – although some buyers clearly hope the company has some sort of future as the price is yet to plunge to zero.

It is however 99.75% below its all time high and has already been delisted by Kucoin.

The order also instructed Horizon State to produce its defence on or before 13 September with the applicants filing their reply by 28 September.

The court documents named Alazarki and his New Zealand company We Do Us Limited as the applicants in the matter.

Alazarki is believed to still own a significant share of Horizon State so its closure would not appear to benefit him.

Alazraki has not responded to Micky’s request for comment.

Yesterday another co-founder Jamie Skella (eventually replaced as Chief Product Officer by Andy Ellis) spoke out on Twitter to say the whole thing had come as a complete shock.

Just days earlier he’d been announced as joining their advisory board.

“I didn’t return to the company; I joined their new advisory board,” he said.

“Of course, it makes little sense to form a team of advisors, only to shutter the company days later, so I can only assume this outcome was abrupt and genuinely unexpected by Andy and Nimo,” he tweeted.

I didn’t return to the company; I joined their new advisory board. Of course, it makes little sense to form a team of advisors, only to shutter the company days later, so I can only assume this outcome was abrupt and genuinely unexpected by Andy and Nimo.

ENHYPEN shares thoughts about its debut

Feeling sore after exercise? Here’s what science suggests helps (and what...

Pfizer vaccine has just been approved: here’s what the next few...