Department store chain Macy’s could be looking at a US$1.1 billion [AU$1.6 billion] loss due to the coronavirus pandemic during the first quarter of 2020.

This is what Macy’s revealed last May 21 when it released its preliminary earnings report. The massive loss report of the retailer cements the fact that nonessential retailers are losing big during this time.

NPR reports that Macy’s situation is in stark contrast to what other retailers such as Target are experiencing.

In the preliminary report released by Macy’s, it said that it was expecting a max of $1.11 billion operating loss. That’s a far cry from its net income last year, which was at $203 million—roughly a 500% drop.

Macy’s previously forecasted the quarter’s sales to be in the $3 to $3.03 billion ballparks, but that may no longer materialize because of this.

The retailer was originally planning on closing 125 of its stores this year. However, the dismal quarter-one performance of the company may mean that it will have to expand on that number.

A silver lining, though: Macy’s shares went up by 1% last Thursday, May 21, which breaks its 12-month streak of falling stock prices.

A historic plunge in retail spending

There’s no doubt that the nonessential retail industry is getting hammered. NPR’s report shows that the industry saw a huge drop of 28.8% of spending for department stores like Macy’s.

Specific clothing and accessory stores were hit much harder, with a 78.8% drop in spending. This could mean that many small independent retailers will have to fold before the economy starts picking up.

Macy’s has been lucky, in that it has bigger padding than many of the affected businesses. However, it still had to close all of its stores in March, and furloughing many of its employees in the process.

Other department stores weren’t so lucky. J.C. Penney has had to file for bankruptcy protection in the period after March, thanks to the fact that it was already experiencing financial difficulties before the pandemic. 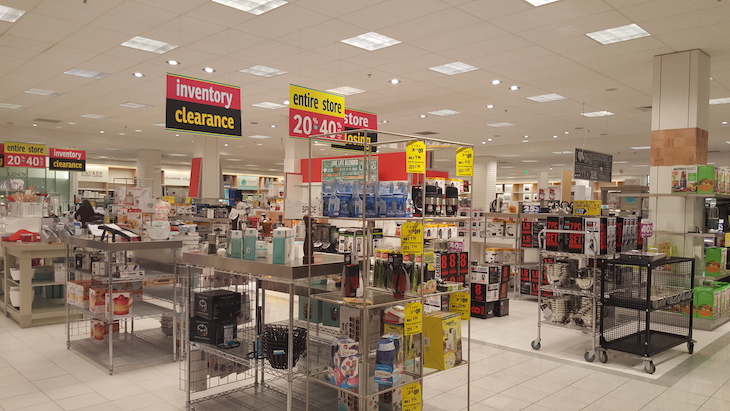 Cautiously optimistic for the second quarter

The sales figures of Macy’s first-quarter were bolstered somewhat by sales made in April, although these weren’t enough to make up for the massive loss. But this has made Macy’s CEO Jeff Gennette a bit more optimistic.

“You see certain brands today that are either going to Chapter 13 or Chapter 11,” he told CNBC.

That means that there’s a vacuum opening up in the retail industry and Macy’s estimates that the market is about $10 billion.

He also told CNN that the retailer experienced an uptick in digital sales in April, which was encouraging.

Macy’s will start reopening stores on May 4 and hopes to be able to open at least 500 stores by the third quarter.