Possible market manipulation on two exchanges has been linked  to a suspicious drop in the Ethereum price. Was it also behind today’s $1000 Bitcoin price jump?

The sudden 9% spike in the Bitcoin price today, coming after sustained negativity that saw Bitcoin wind back from recent highs above $13,000 to just $9,300, has technical analysts scratching their heads.

According to economist and trader Alex Kruger, the price pressure had been downwards in recent days until a ‘short squeeze’ occurred that was difficult to anticipate with conventional TA.

A short squeeze on a margin trading platform like BitMEX is when a large buy order triggers a large number of short contracts to be liquidated, pumping the Bitcoin price.

“No technical analysis could have predicted that squeeze until it was already halfway underway. Bears were fully in control until slightly past 10.30 EST,” Kruger said.

This makes price movements more volatile by amplifying their effects.

“I would say the majority of people by the end of the year will be using margin in some capacity,”  Binance CEO CZ said this week. ” There will be more trading volume and potentially higher volatility.”

Today’s sudden spike came less than a week after a massive Eth sell off on July 15 triggered a flash crash and $164 million worth of liquidations from traders with long positions.

Some people claim this is a result of market manipulation.

YouTuber Chico Crypto claimed to have identified a whale who deliberately crashed the market by putting in a massive sell order for 15,000 ETH on Bitstamp that crashed the price from $270 to $190.

“The mass sell-off and resulting liquidations was the work of some market manipulations,” he claimed.

BitMEX pulls its price data for contracts from just three exchanges – Kraken, Bitstamp and Coinbase Pro – all of which have less liquidity than Bitmex.

Chico believes the flash crash spread ‘like a disease’ from BitStamp to BitMEX ETH futures, causing contracts to be liquidated and then spread to Bitcoin.

A similar event happened in May after a large Bitcoin sell order heavily impacted Bitstamp’s order book, which led to a liquidation of $250 million long positions on BitMEX.

The Bitcoin price plummeted 20% in the space of 30 minutes and the exchange launched an investigation into the suspicious sell order. 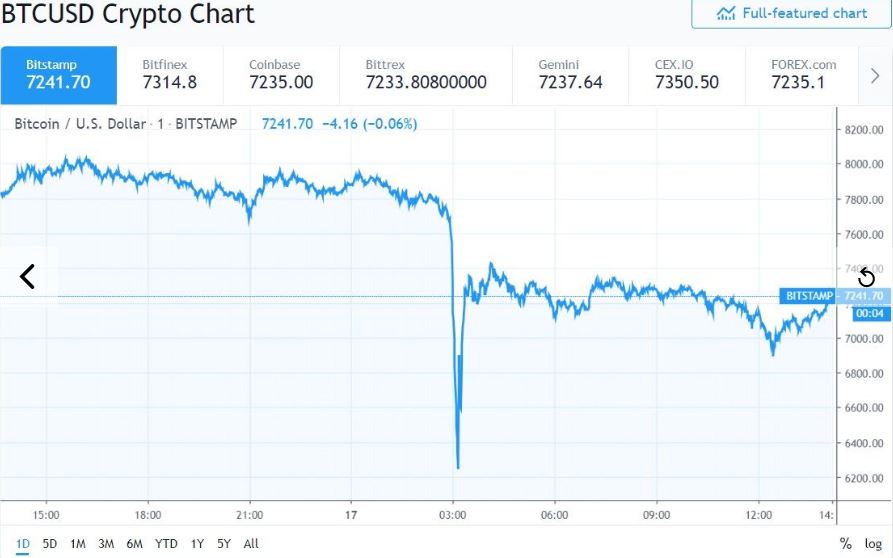 Professor of Economics at New York University Stern School Of Business has also taken aim at BitMEX this week, suggesting that it and other exchanges are involved in “systemic illegality” in an essay titled “The Great Crypto Heist”.

He claims BitMEX makes up to half of its revenue from liquidations.

“To be clear, with 100-to-one leverage, even a 1% change in the price of the underlying assets could trigger a margin call and wipe out all of one’s investment.

“Worse, BitMEX applies high fees whenever one buys or sells its toxic instruments, and then it takes another bite of the apple by siphoning customers’ savings into a ‘liquidation fund’ that is likely to be many times larger than what is necessary to avoid counter-party risk.

“It is little wonder that, according to one independent researcher’s estimates, liquidations at times account for up to half of BitMEX’s revenue,” he wrote.