The first Marvel’s Avenger War Table live stream episode featured so many details about the upcoming game. The devs gave us the first look at its mode of play—co-op and war zones.

To sum it up the Marvel’s Avengers War Table live stream gave its fans a thought that’s very convincing—there’s a lot going on in the game. In a nutshell, the recent dive deeper stream showed everyone that nothing is narrow about the game.

There’s a lot going on. There are hero-specific missions, there are the team plays, and there’s the rebuilding of the Helicarrier—the Chimera. All with the end goal of defeating A.I.M. and of course, M.O.D.O.K.

One quick thing to note is when the construction headquarters was called the “Ant Hill.”

By any chance, is Ant-Man part of the resistance as well? The devs did say that new heroes and playable regions will be released following the gam’s official launch.

After presenting the Thor gameplay, the type of moves that are called “Heroic moves” were discussed. Basically, it has the same concept as passive and ultimate in other games, but with the addition of support.

Support moves can be of great use in co-op plays.

Aside from Support, there’s the Assault. It charges the fastest, it’s like a first skill if you look at it as a MOBA game. According to the stream, it stores multiple charges to be strategically use as part of players’ combos.

These can be performed after charging the heroic meters with normal attacks. The example made was with Natasha’s Widow’s Bite.

Then there’s the ultimate, as many gamers already know, this is the most powerful skill. It takes longer to charge but it is definitely worth the wait, once players unleash it—of course if players will be able to use it right.

It has more screen-clearing power and some even have residual effects like that of Thor’s Bifrost ultimate.

Fans will be happy to know that the heroes’ signature powers are based on the comics and the famed movies.

The devs dove further to the mode of play catering to up to four players. Aside from the solo hero missions, players will be able to enjoy a co-op team play. Other fans are far more excited with the co-op mode, as it would seem.

The team play showed Kamala Khan and Hulk powerfully smashing one of the mechs with Ironman finishing the job. The support heroic moves will allow players to buff up their teammates as well.

There was even a snippet of Thor’s support move buffing up Ironman as he flew past the one of Thor’s thunders. This is where each individual powers can merge into the others and create a very cinematic match up against A.I.M’s adaptoids.

There’s also the mention of war zones. These are the missions playable for up to four players. It can also be played solo as well, with AI companions filling up the team for you. It’ll absorb the levels of the characters you have. 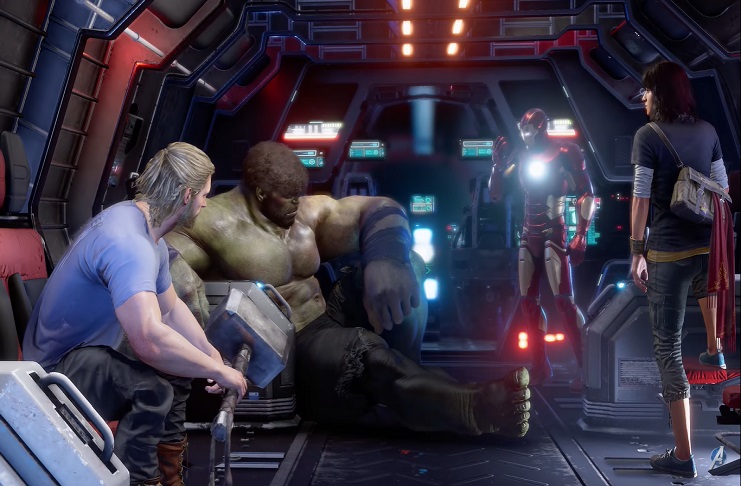 Furthermore, Crystal Dynamics told Windows Central that the upcoming DLCs will not cost anything, which was also mentioned during the War Table event.

The only payment that fans will make is when they buy the game itself on September 4.

The DLCs are said to include unannounced heroes and other additional missions. Meanwhile, it was mentioned that M.O.D.O.K. is only “one of the main villains,” so we are to expect other villains to shake the Avengers.

This month’s War Table is said to be just the start of other War Table events to come prior to its global release.