Crypto influencer John McAfee has sensationally backed down on his $1m Bitcoin bet, renouncing ‘ancient’ BTC in favour of Ethereum and Monero.

For those who came in late, the virus software pioneer McAfee had bet the price of Bitcoin would top $500,000 by 2020 or he’d “eat his own dick” on live television.

He later revised the prediction upwards to $1 million in light of Bitcoin “accelerating much faster than my model assumptions.”

But with 2020 dawning, and the price remaining stubbornly 95% below his prediction, he’s backing out of the bet.

This comes as no surprise – as McAfee himself said earlier today: “What idiot thinks anyone is going to eat their own dick, especially on TV?”

But it’s the way McAfee has renounced Bitcoin along with the bet that’s upset some Bitcoin maximalists.

The crypto proponent called the original cryptocurrency “ancient technology” and suggested it was no more the future of crypto than the “piece of sh–” Model T was the future of the automobile.

A ruse to onboard new users. It worked.

Bitcoin was first. It's an ancient technology. All know it.

Bitcoin is our future?

Was the Model T the future of the automobile?

While it was increasingly difficult to take McAfee’s predictions seriously – in October he said “If Bitcoin is less than $2 million by the end of 2020 then mathematics itself is a flawed disappointment” – there were plenty of people in the BTC community who at least enjoyed the hopium.

So which coins is McAfee backing now (and does it matter?)

Asked to follow up with his picks for best privacy coin and best smart contracts coin and McAfee picked Monero and Ethereum.

Let’s be clear – McAfee is throwing some serious shade at Bitcoin with the Model T comment.

When iHeart Radio host Matt Case tried to argue the Model T is now a “collectors car… it’s not a daily driver or practical for today but it sure went up in value” McAfee shot him down too. 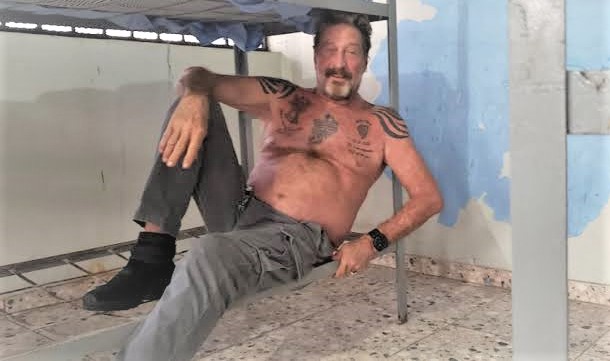 McAfee’s tweet backing down on the bet was received with disgust by some.

Bitcoin maximalist Tone Vays took a different tack, arguing there is zero “innovation difference between a 1917 Model T and a modern day Tesla.”

“In my view, we still drive the Model T today (it just has things like seat belts & gps added) Why is it so hard for @officialmcafee & many others to see #Bitcoin adding additional features?”

There is almost 0 innovation difference between 1917 Model T & Modern Day Tesla. In my view we still drive the Model T today (it just has things like seat belts & gps added) Why is it so hard for @officialmcafee & many others to see #Bitcoin adding additional features? https://t.co/ydK21gUuqv

But McAfee’s “obsolete” call on Bitcoin had plenty of supporters too (admittedly most of them were using it to barrack for their favourite altcoins).

“There you have it folks, the colossal failure that Bitcoin is, is now being dumped by even the loudest most prolific bagholders. Get out before the Winklevosses capitulate,” wrote XRP fan Galgitron.

However, McAfee said he won’t be coming out as an XRP supporter any time soon.

Our country is in a world of hurt.