Panos Panay, Microsoft’s current Chief Product Officer, posted on his Instagram the very first image shot using the Microsoft Surface Duo. The shot is believed to be taken with the front-facing camera as announcements before it has shown that the back-side of the smartphone has no camera cutouts. 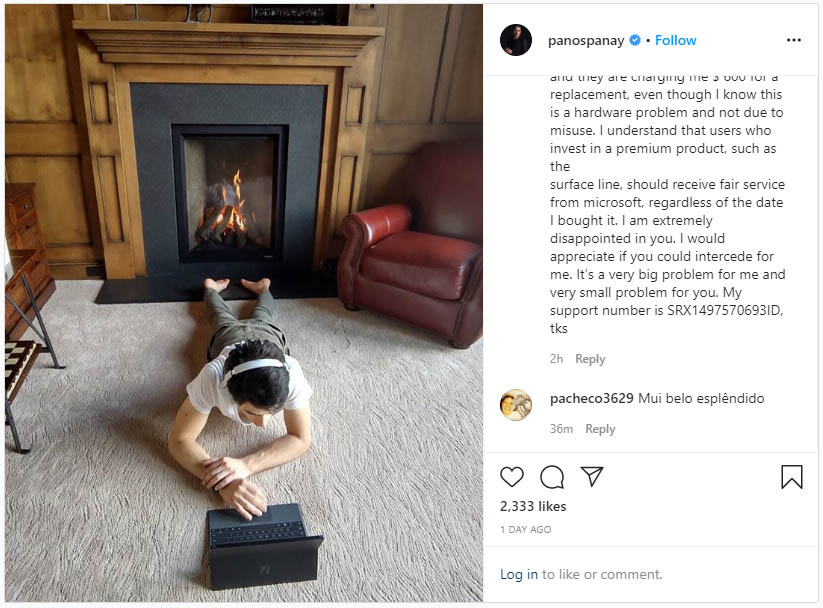 As of the moment, there is no camera specs information available. But based on the photo, the camera takes a great image under good lighting conditions. However, that does not mean that it will suffice for other situations such as a dimly lit room. Microsoft noted though that the Surface Duo will have a “world-class camera” but that is yet to be tested.

Smartphone cameras moved miles away since the last device Microsoft has produced – the Lumia 950 XL. Back in 2015, Lumia was considered a beast with great resolution and dynamic range. It’s a must-have for mobile photography enthusiasts.

Moving on to 2020, there are a whole lot of changes in the smartphone camera department that is considered to be Microsoft’s biggest struggle as they introduce the Surface Duo.

First, the flagship smartphones of Google, iPhone, Huawei, and Samsung are considered the top-tier cameras of this day. Other OEMs are still following the trends dictated by these four companies.

Microsoft, on the other hand, has been out of the market for a while and if they incorporate the image processing technology of the Lumia to their new devices, it might still fall behind in terms of image quality.

Unless it has developed an AI software similar to Google’s Neural Core and Apple’s Deep Fusion, Microsoft will not have an easy way to compete with the top brands.

The Surface Duo sports a dual 5.6-inch screen with 1350 x 1800 resolution. The display is also rumored to have a 401-PPI pixel density and it is not yet confirmed whether it will be AMOLED. It does not fold like the Galaxy Fold, instead, it has a hinge that makes it an 11.2-inches device.

For the processor, it will either be the Snapdragon 855 or the newer Snapdragon 765 with 5G connectivity. At least 6 GB of memory accompany 64 GB of base storage. The device will have a fingerprint reader and USB-C port for charging. There is no headphone jack present on the trailer before.

There is no official announcement regarding the price yet, but according to some rumors that it will be around $1000 on launch.