Two fearsome dragons are set to add more excitement to Monster Hunter World: Iceborne with its upcoming update next week.

First of them is a rather familiar beast. When the update arrives on April 23, players would once again come face to face with Kulve Taroth in a Master rank event quest. The Elder Dragon’s return would grant players the opportunity to get new materials to craft new armor as well as upgrade weapons from the loot gained from Kulve Taroth Sieges.

Aside from the horned Elder Dragon, the game is set to introduce a new monster in the form of Arch-Tempered Namielle. The black, blue, and purple mixed dragon are both terrifying and beautiful at the same time.

Players would get to showcase their incredible strengths as they battle the two dragons in a limited-time event. Rewards would include new equipment, accessories, and materials to craft themed-gear. New hairstyles will also be introduced.

Thankfully, the novel coronavirus hasn’t prevented Capcom from making a new update on the game.

Full Bloom Fest is still on

The dragons won’t be arriving until next week, but players can still partake in the game’s Full Bloom Fest event. Running until May 7, 2020, the event celebrates the arrival of spring and gives players the chance to get fancy new gear and loads of other surprises. 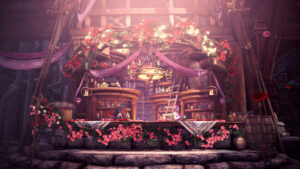 Iceborne is the latest expansion to the Monster Hunter World. Following the story of the first expansion, players are introduced to a new land that is locked beneath snow and ice.

The new expansion has definitely increased the game’s difficulty, and the monsters introduced are more powerful than ever. Iceborne introduces around 20 new monsters for the players to enjoy and slay. However, players will still be able to encounter familiar monsters that they love… to kill.

Players are also introduced to a new zone called the Hoarfrost Reach, which is basically a frozen tundra filled with hidden springs.

The magnificent Kulve Taroth ✨ is making its triumphant return and the mighty Arch-Tempered Namielle ???? is on its way to #Iceborne.

However, in order to play Iceborne, players must first complete the original Monster Hunter: World. Beating the game and exploring it in its entirety could take around 30 to 50 hours of gameplay. Once that is accomplished, it would take another 20 to 30 hours to play Iceborne.

While the game does offer new content, Iceborne’s main selling point is its difficulty. Capcom continues to challenge players in various ways. And as the game sold more than five million copies and counting, it looks like tons of people are taking up the challenge.