A new analysis of 48,000 Reddit posts and 17,000 articles found a shock winner for the coin with the ‘most positive sentiment’.

Researchers from Comparitech set out to discover which cryptocurrencies had the most positive and negative sentiment across Reddit and traditional news outlets.

Using machine learning the company gathered together 48,469 posts on crypto-related subreddits and 17,490 articles from 48 US and international news outlets.

Each article was given a score based on the amount of negative sentiment relative to other articles and posts.

You cannot be serious…

The stunning takeaway: Facebook’s Libra cryptocurrency had a higher sentiment score than any other coin – and by a considerable margin too.

That’s a surprise for a cryptocurrency The Washington Post says that (Almost) Everybody Hates.

It also seems to contradict The Tie’s analysis of sentiment on Twitter in early July which found 54.8% of mentions were negative. However, the researchers noted at the time that Libra was much more warmly welcomed when it was first announced.

By way of comparison, Cardano was the next most popular with 90.3% positive sentiment.

The researchers noted: “From being praised as having one of the most protected, functional wallets to commanding an active community, the blockchain project maintains a positive share of Reddit posts despite past price fluctuations.” 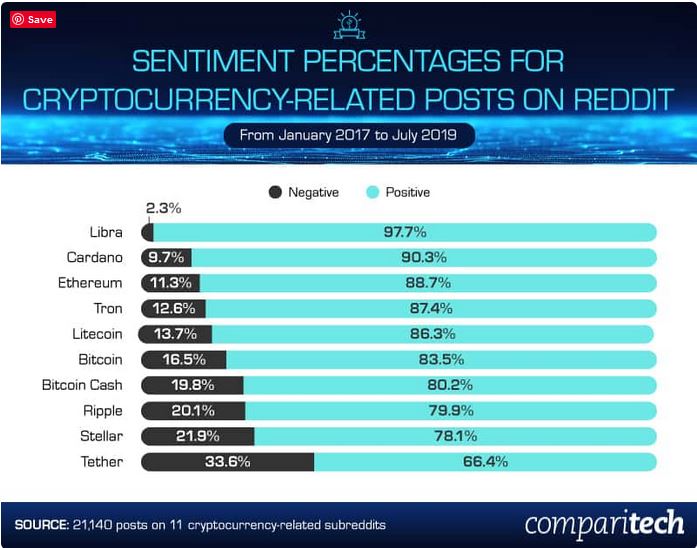 Tether languished at the bottom of the top ten with just 66.4% positive sentiment.

Hilariously, the researches seem to think Tether’s low score actually overstates the controversial stablecoin’s popularity: “The abundance of positive posts submitted to Reddit may be influenced by Tether’s market cap exceeding $3 billion in May 2019 — a 50% increase — from the previous month.”

Some good news is that overall crypto subreddit posts have exploded recently and there are now more than twice as many posts as during the all-time high.

The number of crypto subreddit posts actually topped the all-time high during the bottom of the bear market in November, suggesting good organic growth among highly engaged cryptocurrency investors. 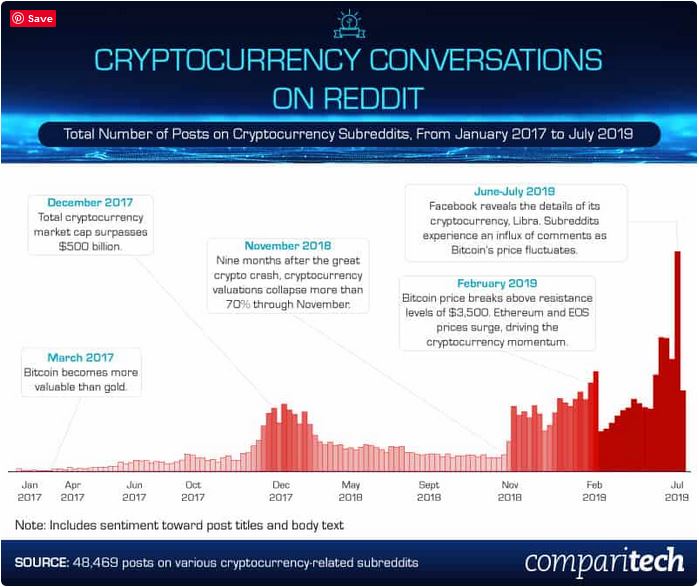 The researchers note that previous studies have found most people are more likely to write a negative review than a positive one.

“This trend, however, was completely reversed when it came to reviewing cryptocurrencies. Internet talk was overwhelmingly positive in the conversations we examined between January of 2017 and July of 2019.”

Only 14.5% of subreddits were scored as having negative sentiment, while 85.5% were deemed positive. (Let’s thank all the coin shills for that!) 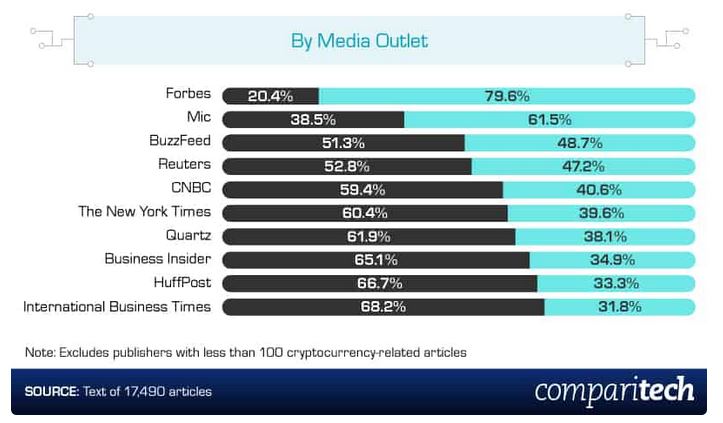 Mainstream media still down on crypto

The mainstream media was of course, much more negative than crypto subreddits. Forbes was the most positive, with 80% of its articles throwing a positive spin on crypto.

BuzzFeed and Reuters averaged about half positive, half negative. The New York Times, Quartz, Business Insider, HuffPost and International Business Times all had more than 60% negative coverage.