In 1995, the Hubble Space Telescope released a photo of a cosmic formation seeming to give birth to neonate stars.  Only this week, a more vivid photo of the “Pillars of Creation” devouring nearby stars was captured, leading to the discovery of its destructive side.

6500-7000 light-years away from Earth, three towers of swirling cosmic dust and interstellar gas epitomized the iconic “Pillars of Creation.”  This phenomenal formation that seems to resemble elephant trunks sits at the heart of M16 or the Eagle Nebula, specifically in the Serpens constellation.

As reported by NASA Science, the Hubble Space Telescope revisited the pillars in commemoration of its discovery and its 25th anniversary this month. Chronicled to be an undeniably incredible and extraordinary sight, the newly captured photo of the “pillars” spark more intrigue than were expected.

The iconic image captured in 1995 was taken as seen in visible light. With NASA operating with better and advanced technologies, the new image of the “pillars” released only recently was taken through infrared light, which can pierce through thick clouds of dust and gas to reveal the parts that had been hidden from plain sight.

Astronomers explain that a comparison of the two images revealed that the mesmerizing blue radiation caused by the central star cluster located just above the three pillars had evaporated the material in between. It was also discovered that a jet-like feature has been forming and lengthening for the past 19 years. 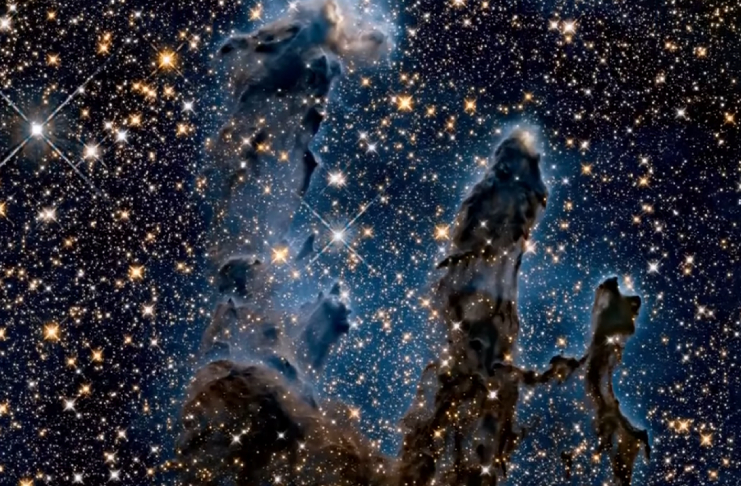 Transforming into ‘Pillars of Destruction’

NASA Astronomer Paul Scown, who helped lead the first Hubble optical exploration, further explains that “as the stars in the tip of the clouds of gas increasingly gain in size, their radiation strengthens, slowly destroying the surrounding gas clouds.” This means that as these neonate stars are being created, parts of the “pillars” are being destroyed.

With this, scientists believe that as the activities in the “Pillars of Creation” are changing, it will consequently take on a different form in the coming years.

Will these stars destroy the Earth?

As the new image reveals the ghostly activities lurking behind the formation and death of stars and all cosmic matter, some are asking if these mighty baby stars will one day be of considerable distance to Earth and destroy it.

In response to this, astronomers explain that this is impossible because although the “Pillars of Creation” is 3.5 times larger than the Solar System, it is still thousands of light-years away from our planet.

Animal Crossing Amiibo cards are making a comeback this November

‘FarmVille’ will discontinue its operations on December 31

Microsoft Xbox is ready to invade Japan after years of failure