The trailer premiered Monday giving viewers a visual overview of the film’s synopsis.

As revealed in the 2-minute video, Mendes plays the role of a character named Katie, a broke caretaker working for an elderly man named Leonard (Elliot Gould).

Leonard, who is a wealthy man living alone in a huge house, has formed a bond with Katie within the four months she has worked for him. Katie also considered him as a friend.

However, the heartwarming beginning suddenly turned into a dark and mysterious turn of events when Leonard suddenly passed away.

A dark and mysterious story plot

It’s not seen how he died exactly but the teaser showed Katie inheriting all of Leonard’s wealth including his estate.

She and her husband Adam (Jessie Usher) moved into the house not knowing that it would only lead them to “into a web of deception and murder.”

The couple also found a trunk overflowing with money in the attic. And while it seemed like the two hit the jackpot, the preview showed that Katie’s life could be in danger.

The official synopsis stated, “If she’s going to survive, she’ll have to question everyone’s motives — even the people she loves.” 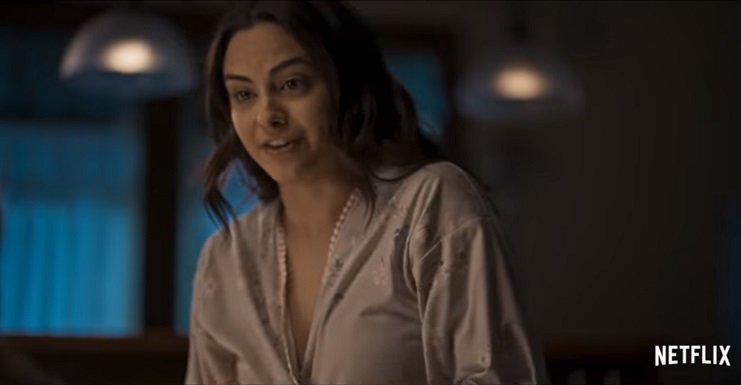 Katie and Adam are also seen fighting about the inheritance as the former is later no longer interested in keeping the inheritance. Adam isn’t giving it up though.

Based on the sneak peek, it seems like Adam has a secret. Does her husband have something to do with Leonard’s death?

And what is the story behind Cam Gigandet’s real estate agent character in the movie? Who is the stranger that came inside their house in the middle of the night?

It won’t be long until Netflix subscribers will get answers as Dangerous Lies is all set to premiere on April 30 exclusively on the streaming entertainment service.

And while the trailer doesn’t reveal the entirety yet, fans have pointed out in the comments section about the upcoming film’s similarity to Knives Out.

Knives Out, which was released last year, is also a mystery-murder plot. It follows the investigation of the death of a father who is found out to have a strained relationship with his family.

Other stars that appeared in the trailer include Sasha Alexander who plays as a detective and Jamie Chung as Leonard’s attorney. Garfield Wilson, NIck Purcha, Briana Skye, Stefania Indelicato, Trevor Lerner and Erika McKitrick are also said to be part of the cast.