The third season of Stranger Things could have served as a season finale for the series. However, the mid-credits scene have made fans thirst for more. Hence, last year, Netflix renewed the famous sci-fi thriller for a fourth season.

Since then, fans have been more curious about the Upside Down world. They were also left wondering whether Hawkin’s chief of police, Hopper, is still alive or not.

Fortunately, with Netflix’s release of Stranger Things four teaser trailer, all the questions about the cliffhanger have been answered. More details about the series are also pouring for the viewers to know.

Production began in March 2020, but is currently at a standstill due to the coronavirus. It is expected to drop in early 2021 with eight episodes just like the previous seasons. In addition to that, Netflix’s official spokesperson, Momita SenGupta has described the series to be bigger, bolder and more intricate than ever before.

Nonetheless, it is uncertain if the upcoming season is the last of the series. Although producer Shawn Levy stated that there’s possibly room for another season after Stranger Things four, the show’s co-creators, Ross Duffer previously indicated that they expected the fourth season to be the last.

This is it — our last Video Store Friday! Every time we discussed a movie, we wrote it on a whiteboard. So here it is — the Video Store whiteboard in its full glory. That means that — yes — on this board, you will discover the DNA that makes up season 4! Enjoy, and stay safe! pic.twitter.com/T7hG1AR3s4

As for the storyline, the creators revealed that Hawkins’ pals will prepare for a new type of horror. They stated,

“A new horror is beginning to surface, something long buried, something that connects everything.”

As shown in the teaser, Hawkins will reprise his role as chief of police. However, it’s not going to be all smooth sailing for Hopper. 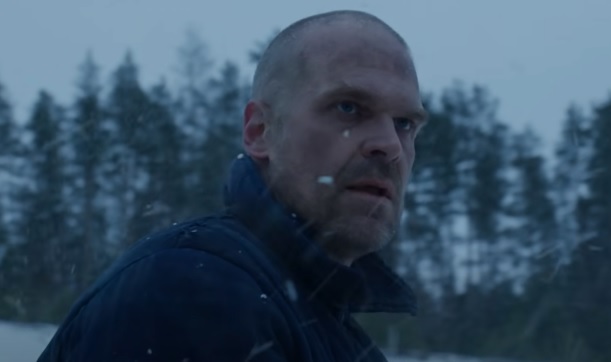 In a letter, the Duffer Brothers wrote,

“He is imprisoned far from home in the snowy wasteland of Kamchatka, where he will face dangers both human… and other.”

Furthermore, the Byers family is also moving to another location. Thus, it is expected that Joyce, Will, Jonathan and de-powered Eleven will have a different storyline from everyone else.

we're not in hawkins anymore pic.twitter.com/Y4hayuPKvu

Despite the fact that Stranger Things has been officially renewed, there are no official casting announcements. However, fans can be sure that they’ll get a lot of the same faces as season three – including Finn Wolfhard (Mike), Millie Bobby Brown (Eleven), Caleb McLaughlin (Lucas), Sadie Sink (Max) Joe Keery (Steve Harrington) and, of course, David Harbour (Hopper).

Maya Hawke (Robin), a newcomer in season three, immediately became a fan favorite, thus, she would definitely be a major presence in the upcoming season. Meanwhile, Caleb’s younger sister Erica (played by Priah Ferguson) would possibly continue to play a bigger role in the series.

Stranger Things is one of Netflix’s hottest properties. Similar to the previous seasons, the renewed series will certainly be exclusive on Netflix.