New Zealand, along with other countries, reported having ‘eliminated’ the coronavirus, reducing cases to single figures. Meanwhile, foreign exchange (forex) rates are positively responding to the decline of cases.

As European countries announced that they will be lifting their lockdown restrictions with caution, it seems like there are others that have managed to successfully reduce the cases.

On April 27, New Zealand was able to ease restrictions from “level four” to “level three,” bringing the new cases to single figures, as per CNN.

Together with the director-general of health Dr. Ashley Bloomfield, Prime Minister Jacinda Ardern said that though the coronavirus was “currently eliminated,” the country needs to remain alert.

A report from The Guardian also came out where reporters tried to ask their comments regarding President Trump’s suggestion to inject people with bleach as a solution for treating COVID-19. Dr. Bloomfield’s blank response was captured from a user on Twitter.

In a CNBC report, Australia, New Zealand, and South Korea have been praised due to their efforts in containing the coronavirus, at least for now.

In effect, the country’s respective currencies also jumped significantly from earlier this year in the time where the outbreak disrupted the Asia Pacific region.

ANZ Research’s Foreign Exchange Strategist, John Bromhead, wrote in a note that both Australia and New Zealand have the majority of their export destinations emerging from lockdown sooner than the U.S. and much of Europe, as he adds:

“Australia and New Zealand are in a relatively solid position. Both have strong virus containment, relatively high shares of primary industries sheltered from the consumer-centric slowdowns, and strong fiscal responses.”

The Australian dollar, one of the region’s worst-performing currencies last year due to its slowing economy along with China, its largest trading partner, was able to bounce back coming from a low of US$0.5798 [AU$0.89] in mid-March as COVID-19 concerns took place, surging over 11%.

South Korea is now recognized as a role model for successfully containing the outbreak, after being Asia’s worst-hit country outside China as it established widespread testing and intensive contact tracing.

The Korean won bounced back to almost 5% by around mid-April as cases lessened.

However, other countries in Southeast Asia may be the next targets for the coronavirus according to recent data. 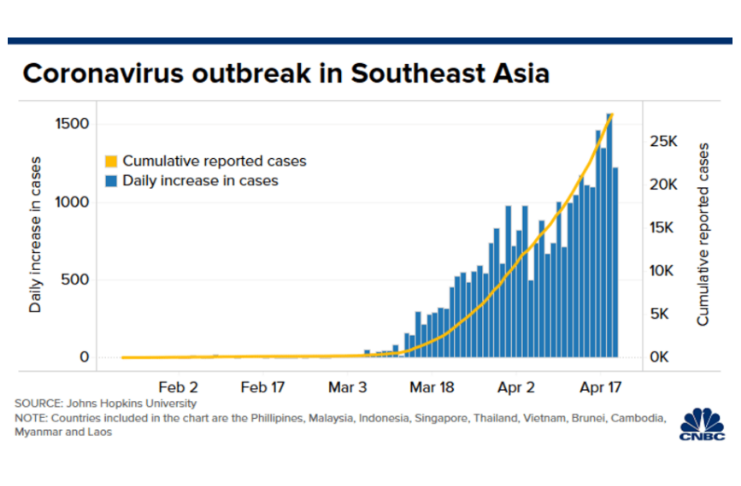 East vs West in coronavirus containment

Despite the controversies surrounding China about suppressing information about the coronavirus, countries on the eastern part of the world may have been performing better in these past few days.

Meanwhile, in the western part of the globe, the U.S. currently has the most number of coronavirus cases to date. There’s also the recent report from Chile wherein deaths were reportedly counted as recoveries.