The latest No Man’s Sky patch update introduces brand new technology, improved environment setting, and base building. One of the biggest highlights is the addition of a controllable mechanical walker dubbed “The Minotaur”.

Update 2.4, or the Exo Mech patch update, had a lot of changes integrated into Hello Game’s survival game franchise. The UK-based company has expanded the player experience by adding a VR control option on its newest game item.

How to get the Minotaur

Before you get to enjoy riding around with the controllable mech, you’ll need to craft the Minotaur Geobay plans. You can buy it for 10 salvaged data at the Construction Research Terminal in the Anomaly.

You’ll need to speak to the Exocraft dealer to obtain the blueprints. Once you got it, you’ll need 5 Metal Plating, 4 Iron Battery and 100 Paraffinium to construct the Minotaur.

After that, you can now continue to explore the landscape soaring high with the Minotaur Heavy Exosuit Hybrid.

Perks of the Minotaur

Buying and crafting the Exocraft suit will be worth it as it comes with a great deal of support and benefits.

With its own set of upgrades and technologies, the Minotaur comes with a unique hazard protection upgrade.

This Exocraft mech suit can explore the most extreme environments. It is immune to all planetary hazards, and can directly collect and harvest rare planetary resources while keeping the pilot safe in the cabin at all times.

Its mining laser can be upgraded with Terrain Manipulation capabilities, allowing it to bore directly through the earth.

The Minotaur also comes with a powerful jetpack.

In addition, this newly added Exocraft suit can be controlled from the cockpit through VR modes on PC and Playstation 4. 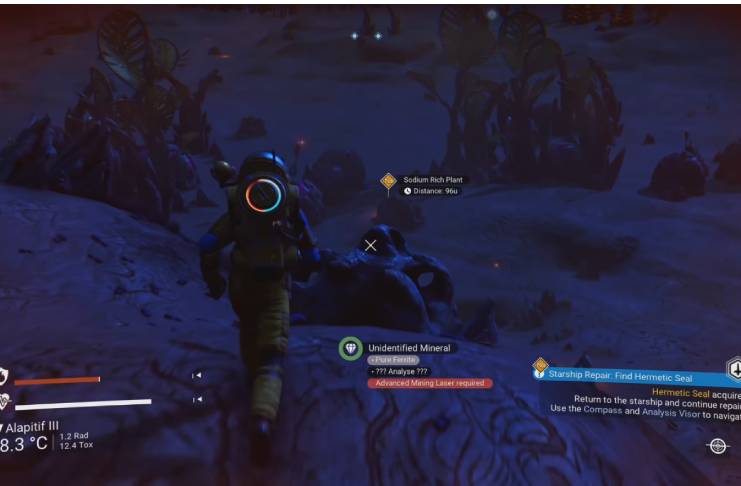 Aside from the added controllable mech suit, there are other Exocraft technologies added to the gameplay.

The Icarus Fuel System, which is an upgrade that recharges the engine during daylight, is now offered by Perses.

Furthermore, an Orbital Exocraft Materialiser has been added. It is a freighter module that’ll allow all Exocraft to be summoned while the freighter is in-system.

Moreover, a new base part called the Electrical Cloaking Unit has been added. This enables hiding the power lines while outside of build mode.

Meanwhile, more than 10 bugs and issues were fixed in this update. Improvements have been made to its gameplay as well.

One of which is the added timeout sequence to the start of Nexus missions to discourage players from going AFK on board the Anomaly after readying up.