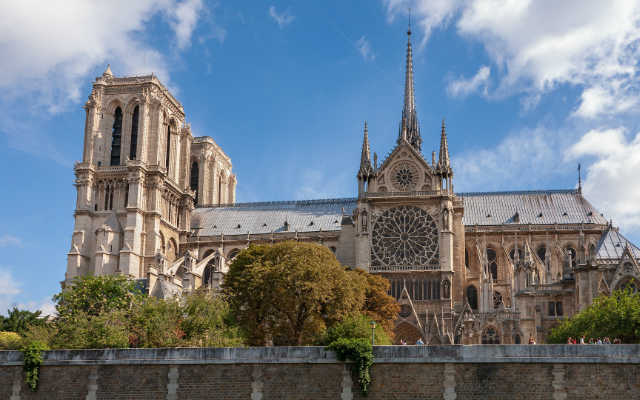 On April 15, 2019, the world watched in horror and sadness as the centuries old Notre Dame cathedral in Paris – one of the city’s oldest and most iconic landmarks – was ravaged by fire. Two days later, more than $920 million has already been raised to help with its restoration and more donations keep coming in.

The Centre des Monuments Nationaux, a government agency that oversees the restoration and preservation of historical sites owned by the French State, has set up a website where people can donate money toward the restoration effort. Although currently only fiat currency donations are accepted, France’s Minister for Digital Affairs Cédric O has publicly stated his willingness to discuss ways in which Bitcoin and other cryptocurrency donations can be accepted as well.

“We had a day to create that website,” O stated, “But we are open to discussing with others. I think the more people we bring in, the more money we can raise.”

O spoke further on the matter, stressing that if cryptocurrency donations were to be accepted for the Notre Dame restoration effort, that they would be subject to the same conditions and restrictions as that of traditional (read:fiat) donations, including:

Donating Bitcoin and other cryptos to the Notre Dame effort

If you don’t want to wait for cryptocurrency donations to be accepted through official French channels, there are still ways that you can donate Bitcoin and other cryptos to help rebuild Notre Dame.

Binance Charity, the philanthropic arm of leading cryptocurrency exchange Binance, announced yesterday that they had launched a fund raising campaign and called on the crypto community to show its support:

On April 15, 2019, a fire broke out on the roof of the historic Notre Dame Cathedral in Paris, France

Donations can be made on the campaign website using Bitcoin (BTC), Binance Coin (BNB), or Ethereum (ETH) and you can choose to donate openly or anonymously. Currently, the campaign has raised more than $16,500.

Le Cercle du Coin is the top French-speaking Bitcoin and cryptocurrency association. Yesterday, they launched the Notre Dame des Cryptos website in order to raise funds for the cathedral’s restoration.

Crypto companies and crypto enthusiasts from all around the world, help us for the restoration of #NotreDame and prove the positive social impact of cryptos. Follow @DameCryptos or visit https://t.co/JytjkG9j0f #blockbyblock pic.twitter.com/n6xDUBtaqk

Donations can be made anonymously in either Bitcoin or Ethereum. Nearly $1300 has been raised so far through this campaign. All donations will be converted to Euros and transferred on May 20, 2019 to the Fondation du Patrimoine, one of the four state-approved organizations to raise funds for the restoration of Notre Dame.

Described as a “flagship event for the blockchain industry”, BlockShow’s campaign was one of the first crypto fundraising efforts to appear in the wake of the Notre Dame fire.

????????????We Announce a Fundraising Campaign for the #NotreDame Reconstruction

Every person that have donated here:https://t.co/d8tVAWRUh3 (fiat) or
????BTC: 1F6Y9zcgYiThUG9xDXYGhEziVWzBgDcVv3
????ETH:0xA9FaCAf7Ba4D9CDaCCa2A9aaedd0D1C242451360
Will Receive a BlockShow Ticket as a Gift???? pic.twitter.com/2LGqFbBzY6

Although they do not have an actual website to receive donations, BlockShow has set up both a Bitcoin and an Ethereum address. Like Notre Dame des Cryptos, they are working with the Fondation du Patrimoine. In addition, everyone who makes a donation will receive a BlockShow ticket as a ‘thank you’ gift. To date, just over $270 has been raised through this campaign.

Notre Dame through the centuries

Notre Dame de Paris (Our Lady of Paris) is widely considered to be one of the greatest masterpieces of Gothic architecture still in existence today and, as a house of worship, is revered by Catholic faithful around the world.

Construction of the magnificent cathedral began in 1163 and took nearly 200 years to complete. It has stood sentinel over the city of Paris ever since, surviving social upheaval, revolution, and two world wars – not to mention the ravages of time – in the interim.

Despite the devastation of the fire at Notre Dame, there is much to be thankful for. No lives were lost and much of the structure, as well as priceless relics, artifacts, and artwork, survived the blaze.