There’s one major difference between Ethereum and Bitcoin’s current bag holders – and some argue it’s having an outsize impact on the price of ETH.

With a large active development community and a clear roadmap, the world’s second most popular cryptocurrency Ethereum should be riding high.

Instead it’s languishing relative to Bitcoin and, despite optimism caused by a small spike recently, the $200 price mark is still 30% down on the same time last year.

But it turns out the relative price could be a self-fulfilling prophecy.

According to data from Into The Block cited in today’s The Defiant newsletter, almost 70 percent of Ethereum addresses, holding 50 percent of the total volume between, have lost money since they bought Ether.

That compares with just over eight percent of Bitcoin addresses, holding about the same share of BTC volume, which are currently down on their Bitcoin investments.

The psychology of those who’ve lost money, to those who have made money, is completely different.

The figures suggest there are large numbers of unhappy Ether holders who are looking to cash out every time the price rises enough so they can recover all, or part of, their losses.

For the time being, this is thwarting a recovery in the ETH price.

“Whatever the reason, Ethereum will probably have to shake off those weak hands before it can have a sustained rally,” The Defiant suggested. 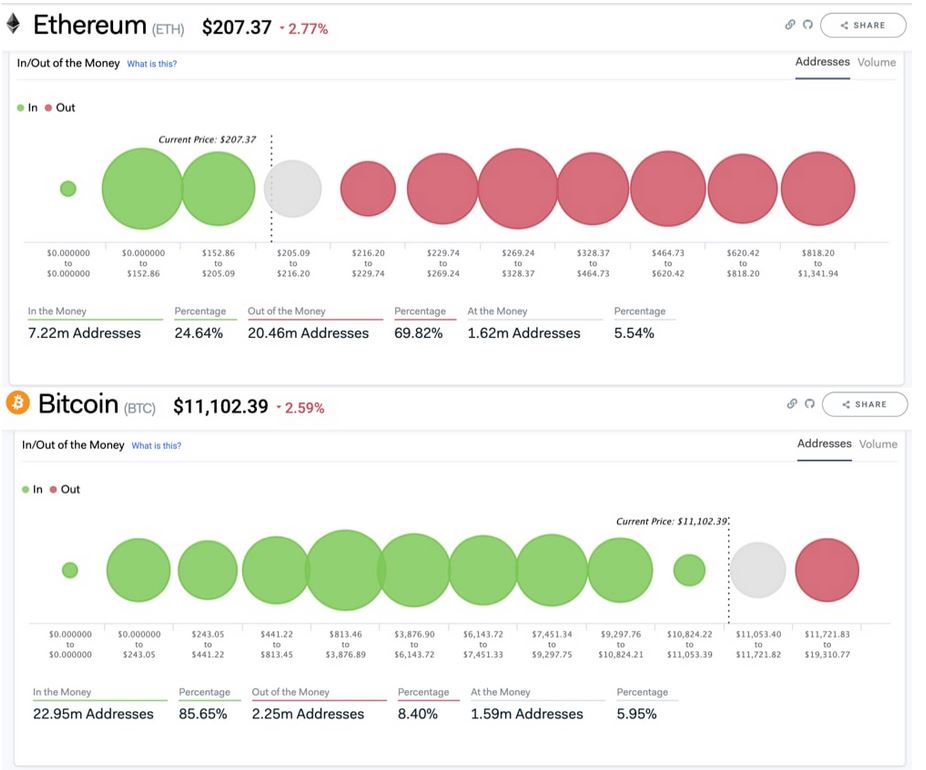 While in the short term the price goes up and down for all kinds of reasons, a long-term factor weighing on the price is uncertainty over Ethereum 2.0.

Ethereum is betting the farm on an unproven and delayed upgrade to Proof of Stake blockchain due early next year.

Between now and then a number of other upgrades (or forks) will occur including Istanbul parts 1 and 2.

While Bitcoin faces many of the same challenges around scalability, it lacks a consensus roadmap so it will probably advance in incremental steps, rather than one giant leap like Ethereum.

Buterin isn’t talking up the price

Co-founder Vitalik Buterin isn’t dancing around the subject either as a way to pump the price.

In fact, he thinks the volatile price is a barrier to adoption: “It would definitely be better for the space if [price] peaks and drops were milder,” he said.

He told Canada’s The Star newspaper yesterday that the Ethereum blockchain was “almost full” and that was stifling its commercial prospects.

“Scalability is a big bottleneck because the Ethereum blockchain is almost full.

“If you’re a bigger organization, the calculus is that if we join, it will not only be more full but we will be competing with everyone for transaction space.

“It’s already expensive and it will be even five times more expensive because of us (due to higher transaction fees). There is pressure keeping people from joining.”

Buterin said Ethereum 2.0 will bring down transaction costs down by a factor of more than 100, while only having “modest” impact on network security.

He views Ethereum 2.0 as rebuilding the blockchain from fundamentals.

“The main problem with the current blockchain is this idea that every computer has to verify every transaction.

“If we can move to networks where every computer on average verifies only a small portion of transactions then it can be done better.”

However, even if the Ethereum 2.0 goes flawlessly from a technical standpoint – and that’s a very big if – that doesn’t guarantee its longterm success.

“Even if the tech is there — how do you turn it into something people will use?” he asked.