One Piece chapter 982 official spoilers are here. Fans who have been waiting for this can now check out the raw scans released.

One Piece, chapter 982, is coming already over the weekend. But it has always been a routine among readers of the manga comics to check out raw scans that are released ahead of time.

According to Strawberry Hat Manga, the official English raw scans are now here for fans to check out and get a preview.

The raw scans provide more accurate details of what’s coming up next in the worldwide popular manga.

What’s in the raw scans?

There’s a lot to look forward to in One Piece, chapter 982, especially after the events from the last chapter.

As revealed, Kaido and Orochi will be found partying at the mansion. Meanwhile, the flying six will be on the quest to search for Yamato. Not all will join, though, as Black Maria will be staying behind to party with Kaido.

Orochi is delighted with something–the ghosts from 20 years ago are now gone, and now he is worry-free regarding the matter.

The current shogun of the Wano Country even tells his ally Kaido about Kanjuroa and how he has been acting for the last 20 years.

Kaido gives Orochi praises and compliments him as a big deal. For Kaido, maybe even Akazaya eleven may not have an inkling about Laugh Tale.

Kanjuro arrives at the castle

Meanwhile, Kanjuro finally arrives at his destination, which is at the castle. It was a long and tough journey, with beast pirates trying to stop him.

But he finally made it through. He arrives with Momo, whose face is all swollen up due to Kanjuro’s beating. He has been trying to keep him quiet.

Kanjuro also informs the ones in the castle that he was unsuccessful in stopping the Red scabbards. He fears that they might have already arrived. 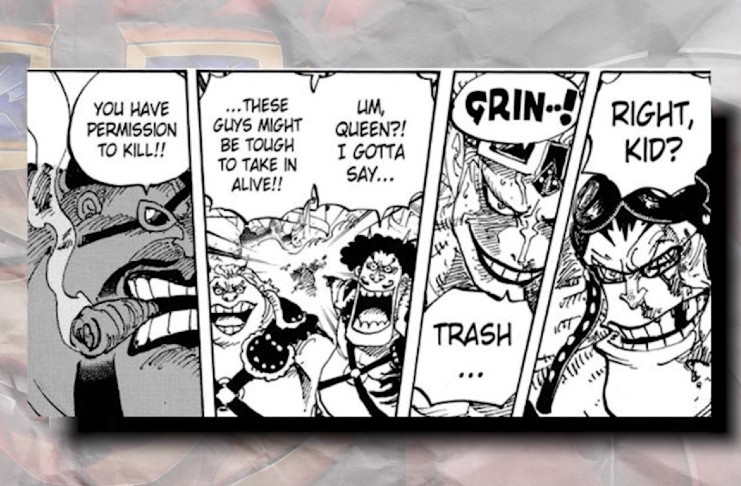 Kaido and Orochi are also told that Luffy, Kid, and Zero have been identified on the island. Kaido is restless about the information he just learned.

He asks why he has not been informed about the matter, but he is told that master Queen has been handling it. Kaido is relieved but for a short time only. He wants to hear the news of the Samurai’s dying.

In the last chapter, it was revealed that Marco had arrived. Chapter 982 will show him still on the ship with Nekomamushi, but it seems like Marco knows about Onigashima island.

He has visited the place before. Izo will be surprised and happy to see Marco arrive. Meanwhile, Big Mom is on the East Side, chasing Chopper and demanding for Strawhat’s head.

One Piece Chapter 982 will be available on Sunday, June 14.