An Aussie sparked furious debate for a risky Bitcoin bet on his retirement. Has he turned his back on $3.14m using conventional strategies?

Redditor RecessionTime sparked a furious debate on Reddit after revealing he’s betting 90% of his retirement account on Bitcoin – and says he would have bet more if it wasn’t illegal.

In Australia employers are legally obliged to pay 9.5% of employees’ income into superannuation accounts, which can only be accessed upon retirement.

Most of this money is put into large superannuation funds which invest in stocks and property – however individuals are allowed to set up a Self Managed Super Fund and invest in pretty much whatever they like.

An increasing number of Bitcoiners are going all in on cryptocurrency in their SMSFs.

Micky revealed last month the Australian Tax Office had written warning letters to 18,000 Self Managed Super Funds (SMSFs) who have invested more than 90% of their retirement funds in a single asset class, such as property or cryptocurrency.

‘Super is a scam, Bitcoin is secure’

RecessionTime argues that super funds are a “scam industry” that keeps “siphoning my money into their own pockets as management fees.”

“After a decade of not making any money I recently did a lot of paperwork to roll all the money into my own SMSF so that I could invest 90% into BTC.

“I would rather do 100% but the law states I cannot have more than 90% of my funds in one asset class. The rest I reluctantly put into buying gold.”

“I’ve encouraged my sibling to do the same and every year from now 9.5% of our wages will go to our SMSF and 90% of that is buying Bitcoin until we reach retirement age. I personally think everyone should be doing this.”

The wrong week for the announcement

This week probably wasn’t the most ideal to demonstrate Bitcoin’s security.

A little over a week ago RecessionTime’s SMSF account would have been worth $60,600.

Levigoldson said: “I think this will turn out to be one of the smartest things you have ever done.”

But for every message of support, there was someone calling the OP out for betting his retirement on a risky, speculative asset that could potentially lose 99% of its value at the stroke of a regulator’s pen.

“I love Bitcoin but this is fairly irresponsible,” wrote AcceptsBitcoin.

“I think it’s cool to make some bet on cryptocurrency, but nowhere near 90% of your super. Diversification and risk management may be “old world” thinking, but it does protect you somewhat.”

Irish chippy wrote: “This bloke is a fu— idiot.

“This is why SMSF shouldn’t be allowed. People need to be protected from themselves so they have money in retirement.”

Jameshowitt pointed out that one of the most popular super funds, Australian Super has seen “an average annual return on the Balanced Option of 9.65% since 1985 and their fees are competitive.”

CPCPub said: “This is the dumbest thing I’ve ever read. With a small bit of knowledge it’s quite easy to invest your super correctly and get 7-9% returns over your lifetime.

“Any Australian can take a small super contribution and turn it into a massive windfall.”

Experts recommend under 10% in crypto

Finance experts recommend you only put a relatively small percentage of your overall investment portfolio into cryptocurrencies given the volatility and high risk.

RecessionTime may also be unaware of the miracle of compounding interest, which provides a steadier path to a comfortable retirement. 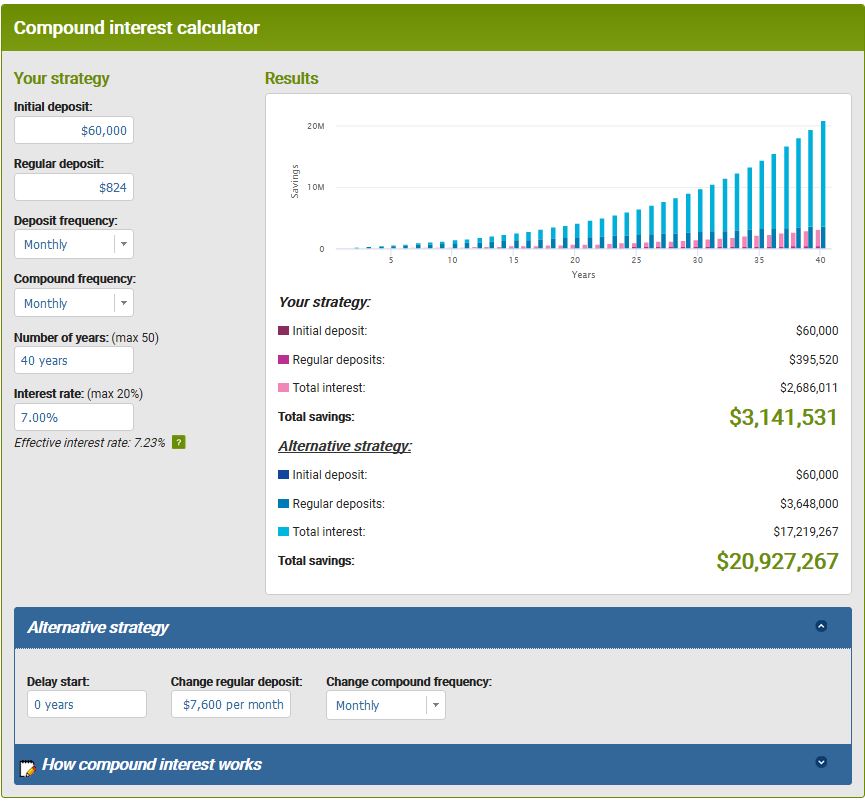 Let’s assume that RecessionTime has another 40 years left until he retires and is on slightly less than the average Australian wage on $80,000 a year.

According to ASIC’s MoneySmart compound interest calculator, with an initial deposit of $60k and throwing in an additional 9.5% of his wage per month ($653) he would have a grand total of $2.693 million by retirement.

The super rate is also increasing to 12% in a couple of years.

That would mean putting in an additional $824 each month which would mean he could retire with $3.14 million.

The obvious criticism to make is that inflation will mean $3.14 million isn’t worth as much in 40 years time.

That’s what RecessionTime said when someone brought up a similar point. He argued that even an 8% annual return was “only beating out inflation by 3-4% in reality … you won’t have much purchasing power.”

However, this argument doesn’t take into account the fact that in Australia wages typically increase by more than the inflation rate annually.

Which means you’ll retire on a proportionately higher amount than the above calculations show.

So although you’re legally allowed to risk 90% your retirement on Bitcoin, it’s well worth considering the alternatives.

Twitter verification re-opening, for users, to get the blue tick!