The PlayStation Store has kicked off its massive Spring Sale by slashing the prices of over 600 PlayStation 4 (PS4) titles.

With the recent worldwide quarantine in full effect, this could be the best time for consumers to catch up on some games that they might have missed out on.

Luckily for PS4 owners, the PlayStation Store Spring Sale (or Easter Sale as some regions are calling it) went live on April 1 and will continue through April 28.

Keep in mind, though, that some games on sale will be returned to their original price tags on April 15. If you’re eyeing a discounted game right now, make sure to pick it up before then, or at least check how long it’s going to be on sale for.

The first Spring Sale roster is filled with a ton of fantastic triple A titles, a lot of which were released fairly recently.

Here are some of the best deals we came across. We’ve included the price-tags on both the Australian and US Playstation stores. 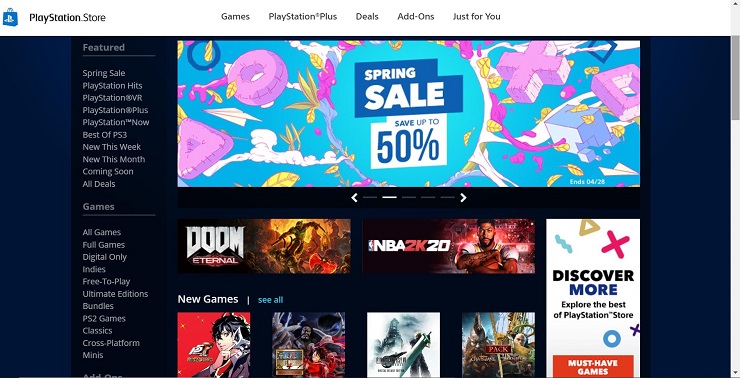 Jedi: Fallen Order’s combat is heavily influenced by the Batman: Arkham series while taking some cues from Dark Souls when it comes to exploration. The platforming sections show great similarities to the more recent Prince of Persia titles.

While the familiar locations and lore will greatly appeal to fans of the series, the stellar combat and entertaining platforming alone are more than enough for action game enthusiasts to enjoy.

Nominated for several “Game of the Year” awards, Resident Evil 2 or RE2 is a remake of the 1998 title of the same name.

RE2 traded-in the original game’s tank controls for an over-the-shoulder camera akin to the one used in Resident Evil 4, and did justice to the original by providing gamers with an authentic survival horror experience.

Tight controls and shooting mechanics along with an engaging narrative pretty much guarantee that fans of the series and horror fanatics alike will find a lot to love about Capcom’s beautiful rendition of one of the greatest horror titles in video game history.

While Control seems to take delight in confusing you more and more with its convoluted (and sometimes downright ridiculous) plot, you can’t help but get drawn in by the game’s awesome world-building and your unshakeable desire to find out what’s really going on.

Add that to Control’s incredibly fun combat system and intriguing puzzles and you’re bound to have a great time.

Death Stranding tells the story of Sam Bridges as he travels across wastelands decimated by shadowy spectral beings brought about by mysterious planet-wide explosions. His goal being to reconnect the fragmented people across the world in order to stop the impending apocalypse.

Death Stranding was initially met with some skepticism due to its incredibly weird trailers which were completely absent of context, but since its release has won multiple awards at Dice and The Gaming Awards and garnered critical acclaim from critics and gamers alike.

More amazing games worth picking up:

See all the Spring/Easter Sale deals on the AU store here and the US store here.