Home Contributed POWER LEDGER BOSS: The text that should have you thinking

In this feature article, Power Ledger co-founder Jemma Green describes how summer power struggles can be handled better in the future.

The message is clear and it comes at us through our texts:

“Hey Power shopper! It’s a scorcher in Victoria today and the energy market operator has forecast high demand on the electricity grid. Are you willing to reduce power usage today.” 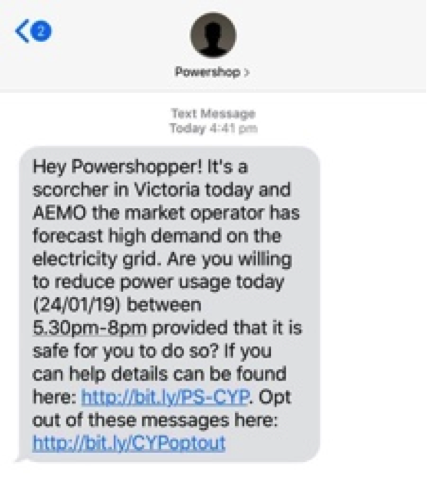 This is the advice for what we in Australia call an ‘event’ – a bump in demand when the power gets in short supply on a hot evening where air con is calling for a lot of electricity.

Follow this message up and you get a list of devices you can turn on earlier and later to help.

The principle is straightforward. Your big household heavy electricity guzzlers that aren’t time critical, like dishwashers, can go on at midnight or maybe the next morning, while washing machines can go on after the ‘event’ at say 9pm. Microwaves can be substituted with barbecues, and suddenly the electrical shortage looks less critical.

It’s a good strategy, and it essentially makes the demand spike wider and, crucially flatter, so it solves the problem. But as a process, it’s very manual.

Who has the time to think about when each and every one of your devices should be switched on?

In a world of the Internet of things, this is also a strangely clunky way of solving a recurrent problem. It’s a patch up job. 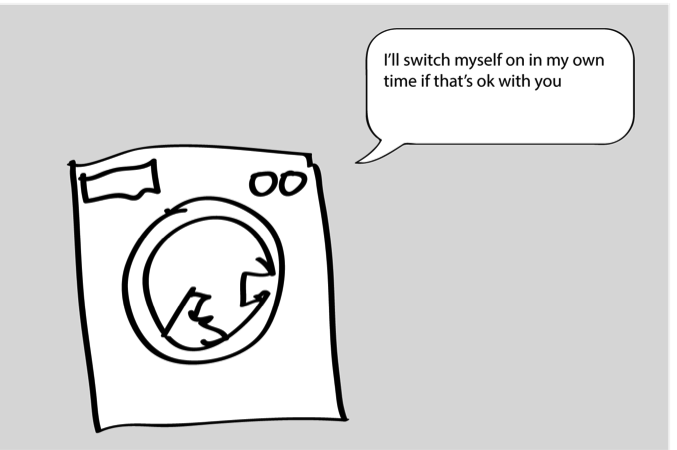 It could all be so much easier

You don’t need much imagination to see how it could all be a lot easier.

Devices could work out between themselves what time they turn on and off, and respond to real time price signals.

These price signals wouldn’t have to go via text and a human, they could be sent over the internet along with the kilowatt hours they accompany.

Now this internet-of-things-automatic-approach is more than just a time saving wheeze to save you all the effort. We see it as providing a mechanism to solve, at a fundamental level, some of our biggest challenges around power and sustainability.

Let’s just think about that dishwasher for a moment. In today’s world, you press an on switch when you want it on. But tomorrow you’ll press the button once, twice, three times maybe to set the level of priority and price you want to pay for its electricity. Three times might run it now, and charge top price. Twice would give you a washing cycle soon at a lower cost. Once might mean any time that gets the cheapest kilowatt slot available.

So why is this transformative?

If you cast your mind back to before budget airlines ever happened, the big carriers charged top dollar and only the wealthy could afford to fly on a city break.

But put in agile pricing and a whole new type of airline is made possible. Because every seat is sold at price that changes every minute, the economics of the flight can be optimised, and more people can fly for less.

Agile pricing turned the industry on its head and made it cheaper to fly Vienna to Dublin than fill up the car with petrol.

And it’s changed the thought process: In the old days, passengers asked: How much for the next flight to Johannesburg? Now with agile pricing, people say where can I go for under 90 dollars return? Or send me a price alert when you see a flight below 40 dollars return.

Because a flight is filled with every price level possible, it accommodates the last minute business category and also the people on a shoestring budget who’ve got the time to plan a long time in advance.

This could happen with electricity. The same kilowatt hour costs vastly different amounts depending on how much in advance you book it and your willingness to surrender it to someone else.

Airline pricing helps create new nuances and products too. Hand luggage only, seating together with families, priority boarding, all made possible when more information comes back from a consumer in a more agile way.

We see the equivalent happening with new products in the power arena too. There will be batteries and electric cars that play a part in flattening out the demand spikes. There will be new and innovative products. Washing machines that decide when they should switch on depending on which other devices are going on or off in your household constellation.

A spot of electrical bother

If you look at the spot prices for electricity they are truly eye watering. 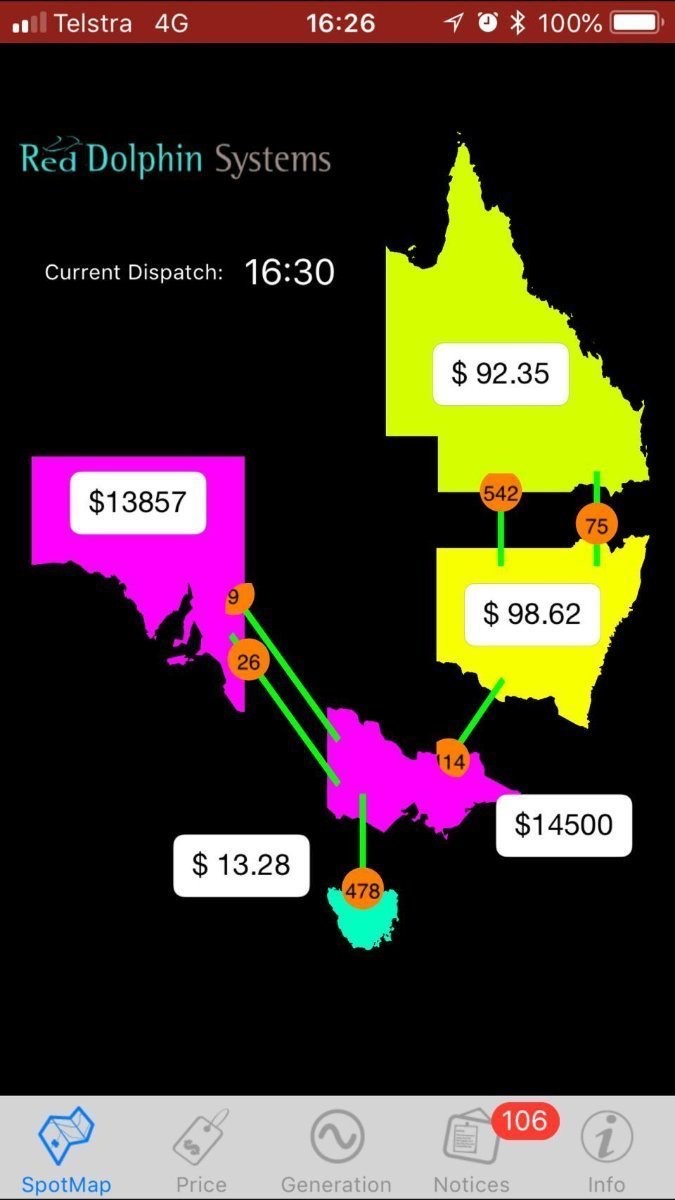 In many ways the centralised pricing exhibits behaviour that wouldn’t be out of place in a soviet command economy. In the USSR in the seventies, massive grain shortages were the order of the day because it was all about the top down management rather than a more nuanced bottom up market.

The way of understanding our shortages in Australia is to do with the difficulty of letting the price signals get through to the consumer in an agile way, and agile pricing will over time as the market evolves through agility, solve that problem.

With agile pricing, effectively the consumer, or really their devices, will become traders in the market helping to create a genuine retail price (as opposed to wholesale price) for every minute. And if you can make money by buying electricity at 17.00 in the evening, and selling it at 17.30 it’s an incentive to invest in some battery capacity. Which in turn helps manage the supply, flatten the spikes and drive down prices further.

But you can only go down this path if you’ve got agile pricing. Which is why the blockchain enabled smart grid system could be such a decisive difference to power in the coming years.

Selling back to the wholesaler

So how does agile blockchain trading really help bring down the price spikes in the market?

Just imagine for a moment a medium size retailer, we shall call Secondo, finds itself selling electricity on a day like we had on the 23rd January 2019.

It’s a hot sunny day and everyone has their air conditioning switched up high. They come home and cook a meal, and the result of lots of other people doing the same thing in the city is inevitable: The spot price of electricity climbs to its record level.

Under these circumstances, Secondo are having to pay huge sums like AU$14 for a kilowatt-hour during the spike. That’s not sustainable for an electricity company that makes barely AU$450 over the year per customer.

So let’s imagine now, on this day you’re a moderately affluent citizen with an entrepreneurial streak in you.

You’ve decided to invest $15,000 in some solar panels and a 15KwH battery that will store three hours of the 5KW output.

You go out for the evening and sell your stored electricity to the grid. Your digital wallet is credited for that evening. A dozen more events like this and you’ve paid your investment back. After that you’ve got free electricity.

Now that’s a great deal. Anyone with a little free capital would be willing to make that investment.

If everyone who can, does invest, you’ve suddenly made a solar powered world. You’ve brought the massive spikes under control and suddenly you’ve got a network where the wealthiest decile of the population are largely self-sufficient.

More than that, they’ve broken the stranglehold that big electricity has over them. And where the wealthiest 10 percent go, others will follow. It doesn’t take much imagination to see the future.

Much has been written about the blockchain and energy. To some extent they’re a distraction the real principles we’ve been talking about in terms of the market dynamics. That’s not to say they’re not important, but if they didn’t exist you could still have the fundamental blockchain and digital payment concept, it just wouldn’t work as well.

If you think about an analogy, what makes a supermarket a step forwards from a corner shop? The key answer is high volumes and low margins, of course.

True, supermarkets have bits of technology that distinguish them, like a moving belt at the checkout and a barcode system to make large volumes easily practicable. Barcodes were innovative technology in the 80s and the belt sped everything up, but these elements don’t make a supermarket. They just facilitate the supermarket model rather than being the premise of it.

The same is true with the blockchain crypto combination. You could engineer the concept without these two elements, but the low friction element they bring in, rather like the barcode and moving belt means easy free transactions, which allow the scale of high volume, and zero margin transactions that drive the concept. They’re very helpful, and almost essential, but they’re not the premise of the concept.

So don’t confuse the technology with the concept. M

Jemma Green is a contributor for Micky and the Chair and Co-founder of Australian energy trading platform Power Ledger.