EXCLUSIVE: A new book about Craig Wright and the ‘Battle for Bitcoin’ has been dropped by its publisher due to fears of legal action.

9.48PM This story has been updated with more information and comment from Wright and Calvin Ayre.

‘Behind The Mask: Craig Wright and the Battle for Bitcoin‘ was due to be published on January 28, but its Australian publisher has told Micky the book is too hot to handle and has now been dropped.

The book, which includes material about “blackmail, police raids, hidden fortunes, death threats and a billion dollar offshore trust”, was written by two highly respected journalists with Wright’s cooperation, and has been promoted by Bitcoin SV house journal CoinGeek and tweeted about by Bitcoin SV’s billionaire benefactor Calvin Ayre.

Affirm Press told Micky in an email: “Unfortunately, that book has been cancelled from our publication list. The threat of litigation was too high.”

Micky asked if Affirm Press if it had received any legal threats from Wright but the company declined to provide any further details on the matter.

Micky also contacted co-author Bryan Kaye requesting an interview for a piece about how the fear of legal action from Wright had caused the publishers to drop a legitimate book.

He said he understood our interest in the story but that he’d have to check with the publisher and his co-author first.

Three days later he told us he was “unable to comment for now” and also declined the opportunity to provide a written statement.

The move could simply be a preemptive strike as Wright has demonstrated a willingness to sue for libel and defamation those who dispute his claim to be Satoshi Nakamoto, the inventor of Bitcoin.

Wright has launched legal action against:

While he hasn’t had a lot of success in court so far, it is still an expensive and time consuming process to defend a case against a wealthy litigant.

UPDATE: Bitcoin SV publication CoinGeek asked Wright if he had “threatened a lawsuit over the publishing of the book” and he indicated he was yet to learn of its contents or be sent a copy of the book by the publisher.

He told them: “Not me. I purchased a copy to be delivered on the 28th.”

Calvin Ayre also Tweeted: “Craig supported and cooperated, had advance bought the book and now is being blamed for killing the book. The only guys that this now points too are Core and their backers.”

The publication date for the Battle For Bitcoin appears to have been timed to capitalize on public interest generated by Wright’s sensational claim a mysterious bonded courier will turn up this month and hand him the private keys to the Satosh Bitcoin billions.

While Wright does not currently posses the keys he claimed today he remains ‘99.9999%’ certain he will get access to the BTC.

Book is about ‘betrayal and human weakness”

According to publicity material for the book, Behind The Mask follows 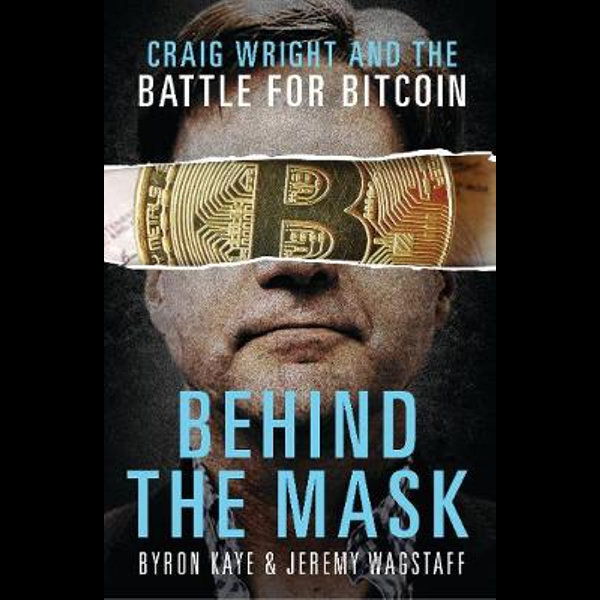 Wright from “his humble beginnings in dirt poor Queensland, to a besuited guru trying to recover his reputation and control over the cryptocurrency state, squaring up to multiple enemies.”

“Painstakingly researched by two international journalists, Behind The Mask is the secret history of Bitcoin, which, it turns out, is as much about betrayal and human weakness as it is about a world-changing technology.”

CoinGeek reported in August that Wright had spoken “with the authors to give his side of the story and we expect it will reveal even more about his past.”

The book was written by two well known journalists: British journalist Jeremy Wagstaff lives in Singapore and has been a tech writer for Reuters and The Wall Street Journal.

Byron Kaye is a Sydney based Reuters journalist who won Journalist of the Year from Publishers Australia in 2012.

He claims to have been the first reporter on the scene when the Australian Federal Police raided Wright’s home in 2015.