A new cybercrime is reported in Australia every ten minutes and 23,000 businesses have been hit already this year. The cost is staggering.

With one in three Australians falling victim to cybercrime last year, you can see why the Government founded Stay Smart Online Week.

The statistics are concerning: almost 23,000 Aussie business have already experience some form of cyber attack this year, with more than 9.2 million malware detections recorded up until June.

In the past three months, there has been an average of one cybercrime reported every ten minutes from individuals and businesses to the Australian Cyber Security Centre.

The total cost of cybercrime in Australia this year (including security professional and systems) is estimated at a whopping $29 billion.

The direct cost of attacks is expected to come in at more than a billion dollars, which is projected to grow by more than a quarter next year and top $1.5 billion by the end of 2022.

While an attack can have a crippling effect on an individual, most of the costs are born by businesses.

The average cost of a cyber attack to a business is a whopping $276,323 (with about half of that spent on detection and recovery). 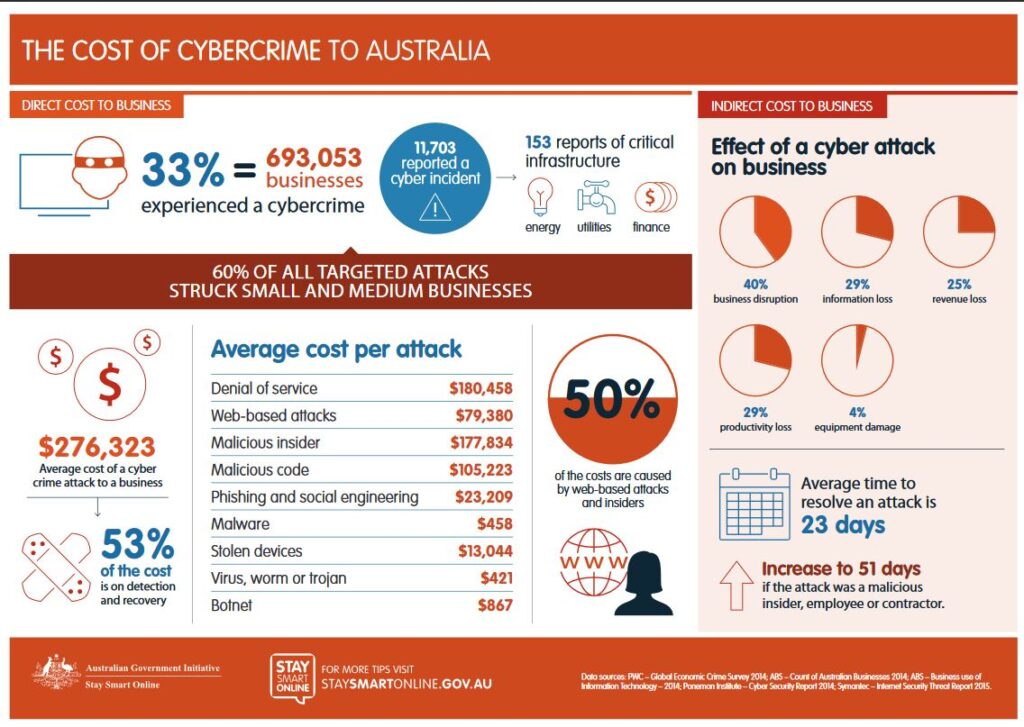 By contrast the much more common virus, worms and trojans only cost around $421 per incident.

Security expert Michael Connory, from Security In Depth wrote in The Australian this week that he believed most local businesses were woefully unprepared for cybersecurity threats.

“With every business, irrespective of size, in the crosshairs, why are decision makers failing to guard their enterprises against cybercrime?” he asked.

He added,”most organisations aren’t falling victim to sophisticated malware. If anything, they keep being duped by run-of-the-mill software.

Ransomware attacks on the increase

Ransomware attacks, such as the attacks that have crippled Victorian hospitals in the past ten days, are on the increase.

They offer a free email service that provides alerts of current threats.

There have been alerts about: