If you suspect some projects are faking their social media hype, you may be right. New research has revealed the shocking extent of the practice.

Crypto social media analytics firm The Tie has just released the results of its research into fake  social media hype among cryptocurrency projects.

It analyzed the tweet and trading volume across 450 projects to create a new metric called ‘Hype to Activity Ratio’.

It measures how many Tweets there are for every $1 million dollars in trading volume (averaged across 30 days).

Crypto projects that are definitely not faking it

The results are instructive to say the least.

Projects that are DEFINITELY not faking their Twitter mentions include Tether, EOS, Ethereum Classic, Cosmos and NEO.

These projects were the top five ‘Least Overhyped’ projects, and all averaged less than a quarter of a tweet per million in trading volume.

“Tether is a stablecoin highly used in crypto trading, so it makes sense that the coin would have a relatively small number of conversations as compared to its trading volume,” The Tie noted. 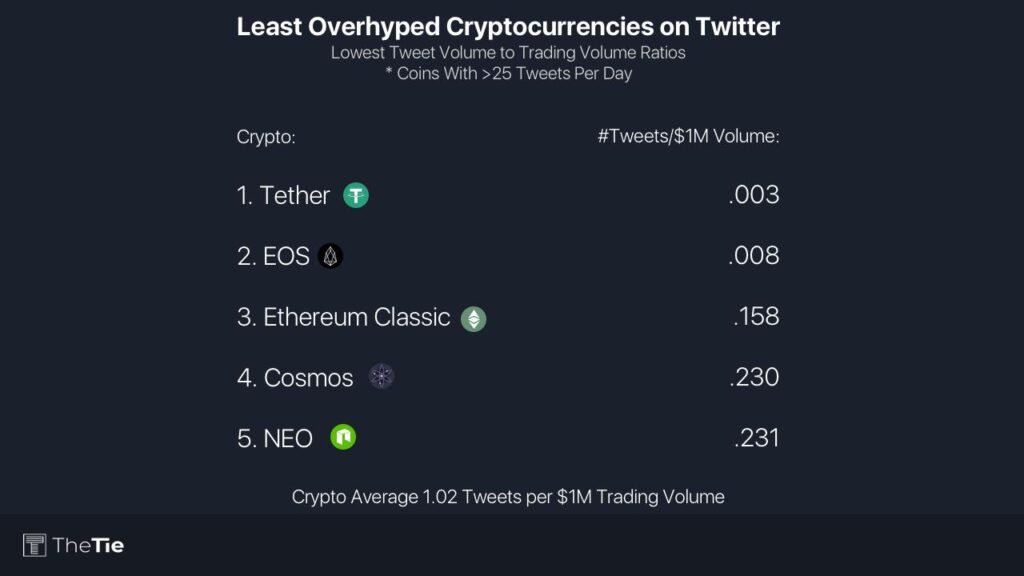 And the most over hyped project in all of crypto-dum?

TokenPay, shills for which managed to pump out 911.1 Twitter posts for every million dollars in trading volume.

TokenPay had a Hype to Activity Ratio 33 million percent higher than Tether – or 330,770 times more tweets.

[UPDATE: Dragonchain contacted Micky to argue, in a slightly passive aggressive way, they don’t belong on the list as they actively encourage users not to trade, but to rather conduct transactions on their own network.

“We have a few hundred thousand transactions within our platform (non ERC-20) per month currently … We aren’t even a cryptocurrency.”]

Let’s be clear – simply paying for a bunch of shills/bots to promote your project on social media is not illegal, nor is it *conclusively* a sign of a scammy project.

And hey, it’s technically possible that these projects simply have an army of ardent supporters active on social media that’s exponentially larger than all other projects. 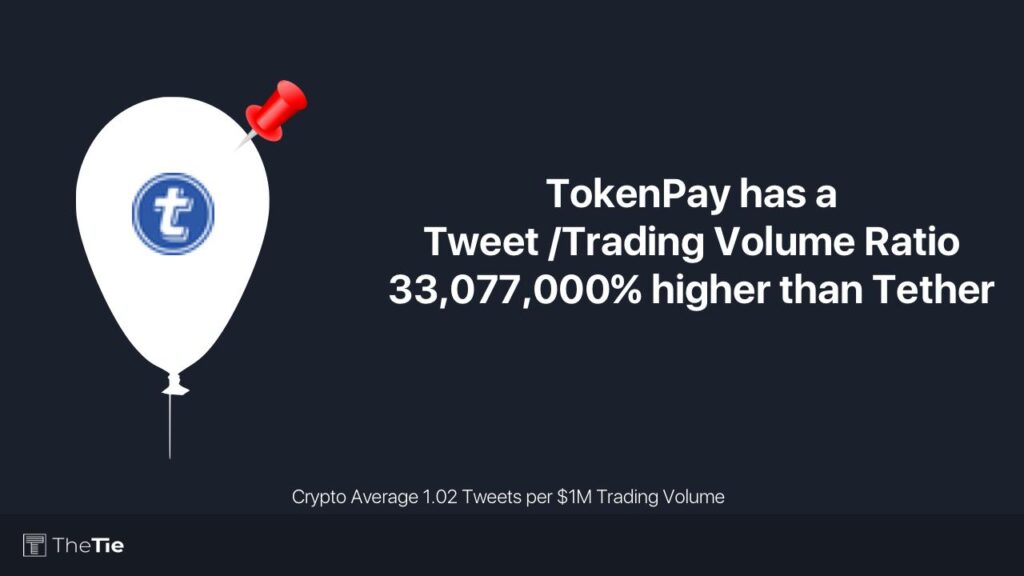 But they probably are says The Tie (not us)

“Just like trading volume manipulation, many of these coins are similarly being manipulated on Twitter by hoards of bot accounts, fake followers, and manipulated engagement,” The Tie said.

At the very least it should set alarm bell ringing for investors who associate a high degree of visibility on social media with potential future profits.

Just because there are lots of Tweets, doesn’t mean there’s a huge community of supporters.

Seasoned pros like Micky readers probably already have a good nose for sniffing out manipulative practices, but as The Tie points out: “this deception is aimed at new entrants into crypto who are often less informed.”

There are a few simple ways to identify fake shill accounts.

Electroneum for example has numerous accounts shilling it with handles that include a string of random numbers.

Another identifier is posts that mention a number of overhyped projects in the same Tweet.

And of course, having absurdly high numbers of Twitter followers is a dead giveaway.

Overhyped, but not necessarily paid for

Some of these projects may simply have a loyal army of over-enthusiastic supporters behind them.

It’s hard to imagine a joke project like Dogecoin paying an army of shills. 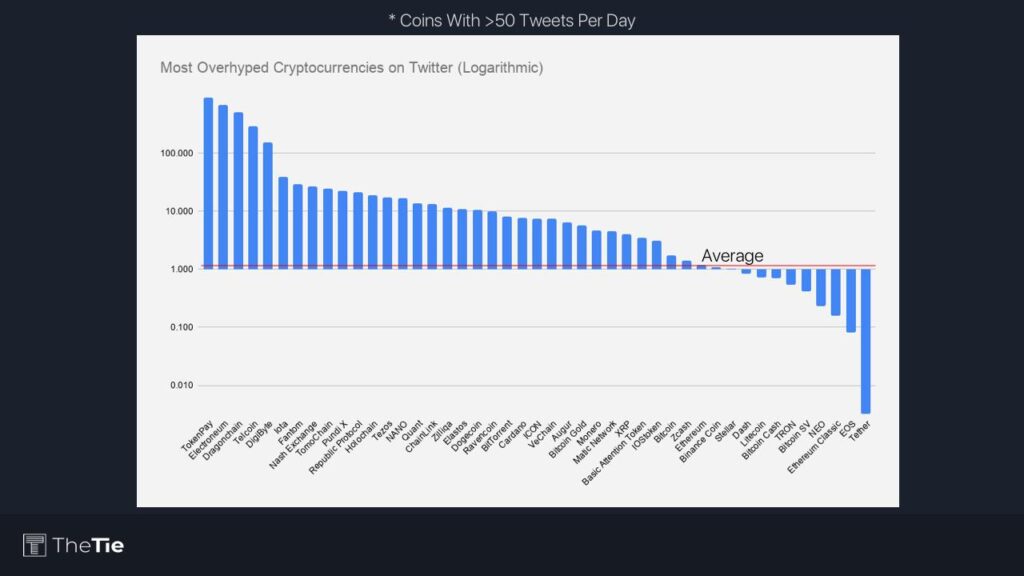 Nevertheless, hype itself can be toxic by giving a misleading impression of a project’s chance of success.

As The Tie says: “While this metric is not perfect, we think it’s a good tool for identifying massive outliers.”

Weirdly enough though, on The Tie’s Logarithmic chart, Tron is also one of the coins hyped much less than average on Twitter, along with Stellar, Dash, Litecoin, Bitcoin SV and Neo. 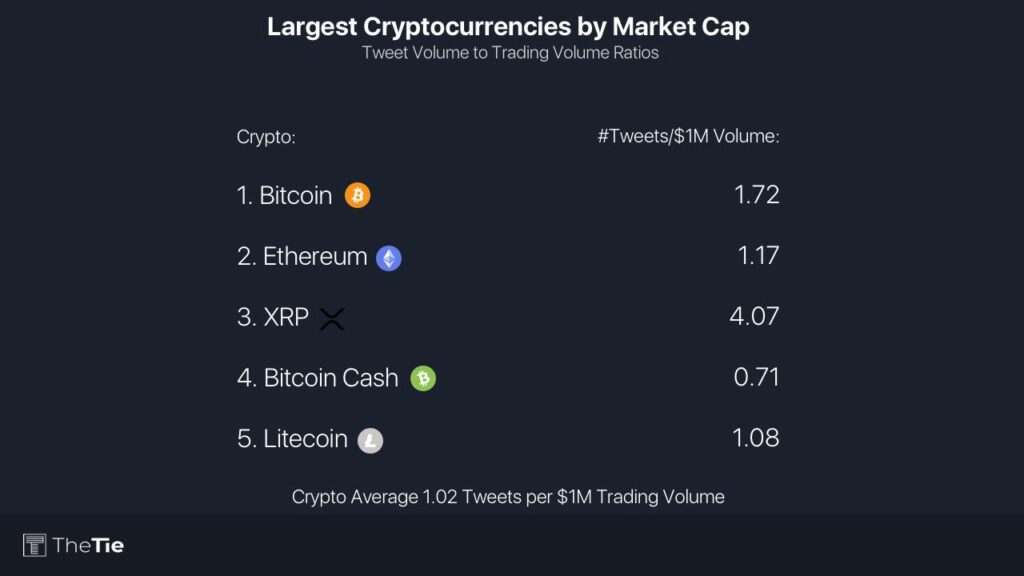 The largest projects don’t fake it. Except possibly one

Among the top five largest cryptocurrencies by marketcap, four of them have remarkably similar tweet to trading volume ratios.

Ripple is the outlier however with 4.07. If the tags #XRPCommunity, #XRPTheStandard and #XRPArmy are included the ratio spikes up to 6.66.

So XRP has six times more Tweets about it than the average coin. Draw your own conclusions about if it’s simply much more popular than average, or if there’s something else going on. 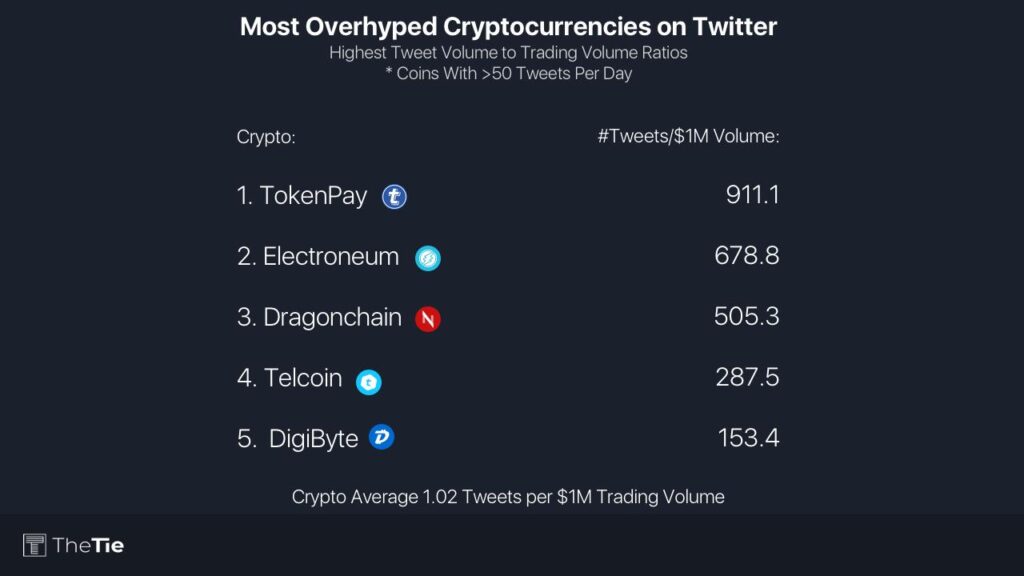 The Christmas gifts that keep giving (your data away) — and...

‘The Mandalorian’ is 2020’s most pirated TV show

The UK begins to roll out the AstraZeneca vaccine among citizens

Long COVID: who is at risk?