Rocket Arena was one of the highly noted first-to-introduce titles during the EA Play Live 2020. Among all, it’s set to launch first.

during the Deeper Dive portion of the EA Play Live, Rocket Arena was an unexpected reveal. One of the details that made it more interesting is its fast approach release, which is already on July 14.

Let’s make sure that we dive further into the details of this exciting new game before the launch.

Here’s what was revealed during the EA Play Live event. It is a 3v3 multiplayer shooter game centered within its own fantasy community that’s filled with Rockets.

The term “rocket” is heard to be used in different meanings—used as a verb, an adjective, the name of the arena, and for weapons used. The game also has its heroes equipped with “Rocket-powered” abilities.

Rockets control everything in Rocket Arena, an explosive 3v3 shooter where you’re never out of the action. Master your hero’s unique rockets and abilities to rule the arena and become a champion.

Basically, the objective here is to master the use of Rockets and the hero’s abilities to emerge as the champion in this arena.

Modes of the game

There are three general categories, the 3v3 modes—consists of four game modes, the Ranked and the Social (other games call it Classic) modes, and the School of Rockets, which is basically a practice mode, but it’s divided into three—Tutorial, Practice, and Custom games.

Of course, all gamers are quite familiar with the practice mode. All games have it—Although, Call of Duty: Mobile just added its own in its recent new season update.

For the four 3v3 game modes: 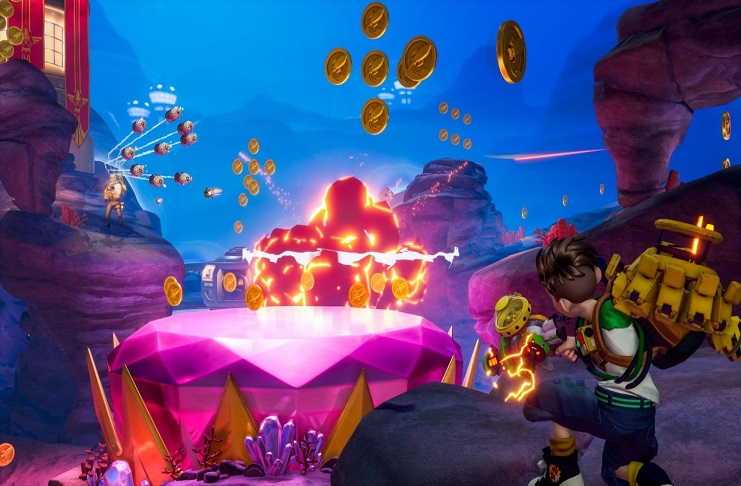 The heroes of the Rocket Arena

There are 10 heroes already made available and First Strike did say, during EA Play, that a new hero will be introduced once the game launches—just like in Valorant.

Rev looks quite similar to Mobile Legend‘s Layla, most especially with her big barrel launcher weapon.

Hopefully, more gameplay videos will be released in the days to come before its imminent launch. The game is set to launch on July 14, but its first official season will begin on July 28. By then, the devs will introduce its battle pass mechanics, which is called “Blast Pass” and the introduction of the newest hero.

Also, Rocket Arena will support cross-play gaming on the onset of the game’s release.