Rogue-lite deckbuilder game Deck of Ashes is out now on Steam, after over a year on Early Access. The full release adds a ton of fresh content over their beta gameplay.

Deck of Ashes offers new features with its release, creating a special Digital Day One Edition. For the first two weeks, the game will give away extra side content that is worth $19.99 for the full release.

The game has many positive reviews on Steam, praising its complexity and interesting system.

Ashes give grimdark gameplay similar to Slay the Spire

Ashes takes on a growing sub-genre of roguelikes similar to hit game Slay the Spire. The deckbuilder gameplay is key to how the game fleshes out its mechanics and the progression of the story.

Also, Darkest Dungeon is another dungeon crawler game that compares to the dark fantasy that Ashes is trying to achieve. 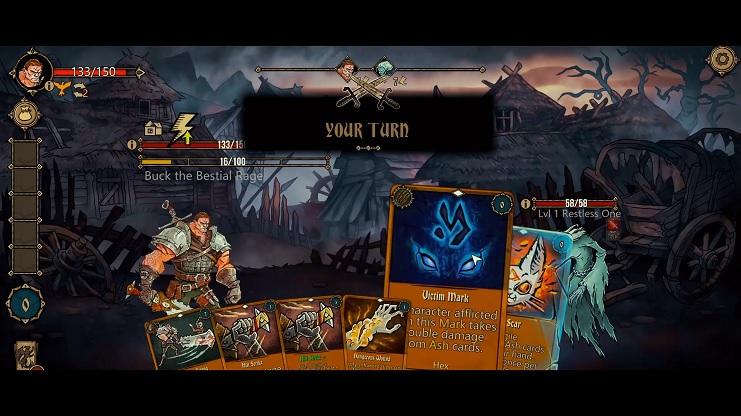 The world of Ashes is gloomy, bordering grimdark, with much of its story swirling around anti-heroes seeking redemption. Players will follow one character at a time, and will likely cycle through them with every campaign.

Following their stories in the campaign, players will also run through a gamut of procedurally-generated worlds and biomes.

Unlike most of its genre, the game runs in a more open, above-ground world. Players will experience different forests, swamps, and more, rather than the usual caverns and dungeons.

The new release adds a whole new campaign with a new character, Magnus the Ugly Jester. Much like many tactical card games, players need to build decks that will help them progress through the game.

Much of what Deck of Ashes offers to would-be players is a unique experience. For starters, the game uses a special Ashes mechanic that takes a bit of health with every card played. This mechanic forces players to be smart with their decisions and be strategic in their play.

The game also has resource management, requiring the player to collect materials to add trinkets and bonuses. The graphics for the Ashes is not bad as well for a 2D dungeon crawler.

As players battle, they will get a treat of hand-drawn art. From the player characters to the enemies, each gives a tabletop vibe to them. Each event is not only eerie but quite enthralling too.

To find out more about the game, publisher AYGames has its Developer Diaries on Youtube. Even if the game is now out on full release, the Ashes will still get many content updates on its way.

For fans of the genre, Deck of Ashes has a creative mini-boss design contest where fans can send in their OC and have a character in the game. The community for the game and contest rules are on Discord.