Aside from Pembroke VCT, another investor, TVB Growth Fund, also joined the investing round for Roto’s VR gaming chair.

Roto’s VR chair aims to address problems that exist in current VR models such as motion sickness. The Roto VR chair auto-rotates 360 degrees depending on where the user is looking, depending on the controller, or through head movement. It also features an internal cable system that reduces unnecessary cables that are seen through traditional VR setups.

The base model Roto VR model can be further improved with a variety of available accessories. It can be transformed into a desktop table and a tablet for hands-on throttle-and-stick control can also be added. For racing game enthusiasts, the racing pack includes a mounted steering wheel and driving pedals. Ports for mouse, keyboard, and other accessories are also included.

The chair comes at a quite hefty price tag of US$1,499 for the base model. For the complete Roto VR with accessories, the bundle costs US$1,899. The company has announced that a consumer-grade version will be manufactured soon in order to bring the product to a wider range of users. 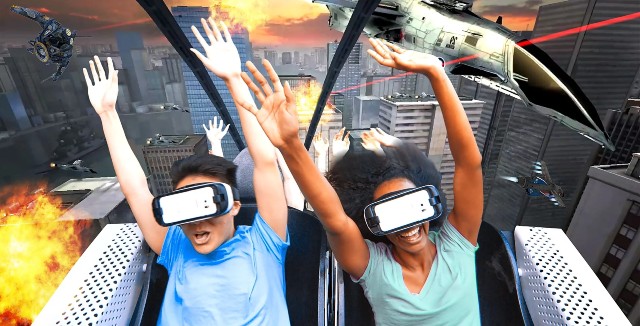 Investing in VR might raise doubts among some because the technology is not as prominent or as common as smartphones. Andrew Wolfson, CEO of Pembroke Investment Managers LLP, explained why he chose to fund the Roto VR.

“In Eliott, we have found an entrepreneur who has solved a problem for the VR market with a solution that addresses the physical issues encountered whilst consuming VR content, as well as significantly enhancing the experience,” Wolfson said in a statement, referring to Elliott Myers, one of the founders of Roto VR.

He added, “We see future customers coming from both the B2B and B2C markets, in fields such as experiential attractions, home, cinemas, and shopping centers. The company has employed a high caliber of people, and we believe that the business is well placed to take advantage of this fast-growing market.”

The Roto VR chair received a mix of positive and negative feedback from several tech forums on Reddit.

According to Reddit user u/dedokta, the Roto VR is “designed by someone who’s never tried VR before.” The reason is most VR games such as Half-Life: Alyx require the player to stand up and be able to move freely. Some games also require crouching to pick-up in-game items, hence the statement.

One user named u/Raemnant countered that the product might come useful for people with disabilities or elderly people who are looking for some entertainment.

Reddit user u/anotherjunkie, who is himself disabled, echoed the latter’s statement and said: “This is actually one of the things I’ve been waiting for as a disabled person! The main reason I haven’t tried VR is that I worry that I can’t move around (walk, squat, etc) enough to make it worthwhile.”

The launch date of the Roto VR has not been announced yet and it might take some time before the product is released for retail. Until then, the usability of the product will continue to spark debates.