The Samsung Galaxy Fold has its fair share of inconsistencies, according to some users. The smartphone bigwig won’t have that, so they unveiled a supposedly better version aptly named the Samsung Galaxy Z Flip. Will it deliver, or will it also follow the Galaxy Fold in a downward spiral?

Aside from the fact that the Galaxy Z Flip looks different from the Galaxy Fold, their specifications are a bit close. The Z Flip is powered by the Qualcomm 855+ that gives more power to its GPU than the Fold’s Snapdragon 855. The Galaxy Fold also has 12GB RAM, which provides more multitasking options than the Z Flip.

That said, what would be the determining factor for the people when the time comes and they need to decide on what foldable phone to purchase? To answer that, further descriptions of their specifications are in order.

The Galaxy Z Flip opens like a clamshell and looks like a regular phone when unfolded. When in folded mode, it’s small enough and takes a little space in one’s pocket. Both screens face each other while wrapped for protection. The phone is relatively light despite having a single speaker within it.

Samsung decided to use a different glass on the Galaxy Z Flip than on the Fold. For added protection, Samsung installed an Ultra-Thin Glass on the phone. When unfolded, the display looks like any other phone but taller. Specifications include a Snapdragon 855+ processor, has 8GB RAM, 256GB internal memory, operates on the 4G band, and runs on a 3300mah battery. 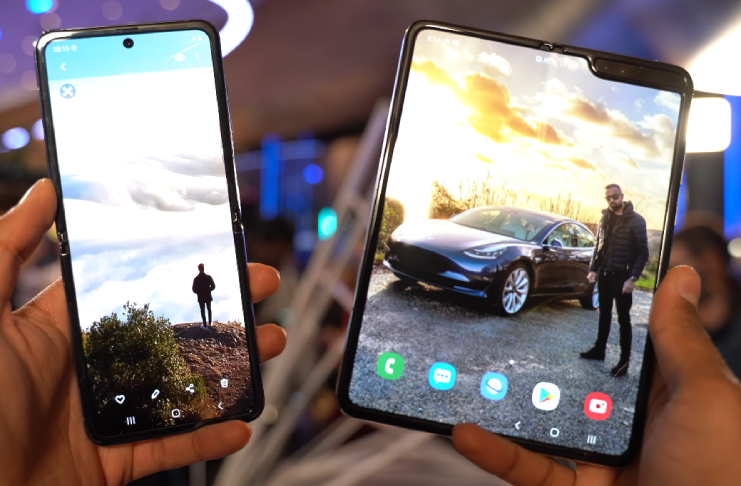 The Galaxy Fold looks like a book in folded mode and opens to a widescreen phone when unfolded. It seems more like a tablet than a phone. Like the Z Flip, both screens face each other when folded together. Both phones use a fingerprint scanner for protection and boast of two speakers for a better listening experience.

While the Z Flip is taller in comparison with the Fold, the latter has a full screen compared to the former. Users can use both phones under sunlight, which is a staple in Samsung standards. The phone is powered by Qualcomm 855, has 12GB RAM, 512GB internal memory, can use 5G connections, and runs on a 4235mah battery.

It is important to note that both phones don’t have microSD support, so users can only use the huge internal storage of the phones for their saved content. In the end, it will be the people who will decide if the Galaxy Z Flip is better than the Galaxy Fold since both phones look promising. Factors like the specifications, overall use, and the price will come into play in making their decision.