Samsung Galaxy S10, Note 10, and S20 users should expect their phones to prompt Samsung’s latest security patch for their phones.

Samsung has been hard at work to salvage the lackluster performance of the S20 series it just launched earlier this year. The ultra-premium phone Samsung Galaxy S20 Ultra is facing tough problems pleasing the masses. It is underperforming based on recent reviews on its 100x Space Zoom feature. It is gimmicky at best, according to many reviewers.

Unfortunately, Samsung was quite secretive about the details of the camera patch. Nevertheless, some users experienced an upgrade on the Night Mode feature on the phone.

Just yesterday, Samsung released its latest patch focusing on its flagship phones’ security. Again, not many details were shared regarding the over-the-air rollout. The update only promises that the users’ phones are now more secure. 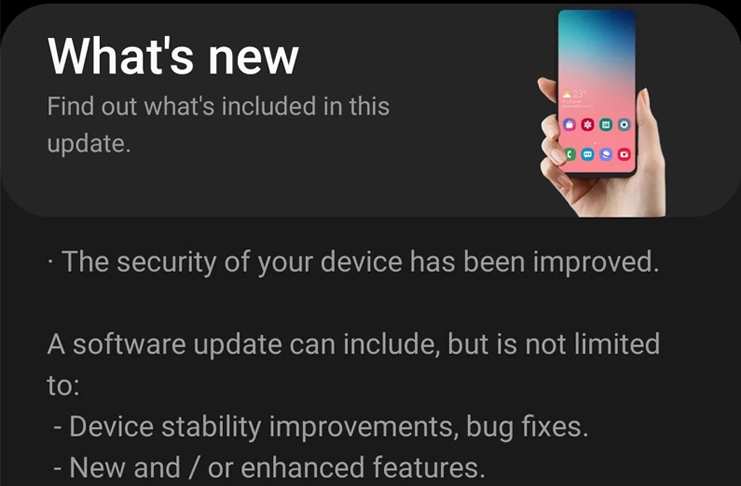 Unfortunately, the rollout doesn’t include any other feature upgrades for the phones. Users may check if the security patch is already available for download on their phones. They just have to hit settings and go to software update.

An important note to keep in mind is that the update will only be available to unlocked phones. Samsung Galaxy phones that have exclusivity with a mobile carrier may expect their updates to arrive at a later time.

Samsung Galaxy fans are running out of patience

Earlier this year, the release of the Galaxy S20 line up was met with much excitement for most people. The majority of people in this context does not include Samsung’s loyal fans. Many of them are fed up with the shortchanging they feel with Samsung’s processor strategy.

Samsung can roll out all the patches that they want, but these fans aren’t contented. They want a more permanent fix. Fans want Samsung to standardize Qualcomm Snapdragon’s processors in all of its premium flagship phones.

The Exynos 990 just doesn’t cut it for the price point that Samsung sets for their premium phones. Should Samsung fail to act on this matter, they stand to lose, not just free brand ambassadors. They also risk losing foothold in key markets around the world.