Samsung has officially announced that it has start mass production of the 512-gigabyte eUFS (embedded Universal Flash Storage) 3.1, its latest storage chip offering, which is expected to be used by a number of its flagship smartphone devices slated to be launched in the latter part of the year.

Smartphone tech enthusiasts and Samsung fans may already know that the new eUFS 3.1 storage chip is the same one currently being used by the South Korean tech giant’s latest flagship devices — the Galaxy S20, S20+, and S20 Ultra — which were released only a few weeks ago.

Several months from now, the chip should feature significantly in the specs of some of the company’s most highly-anticipated phone releases of 2020. 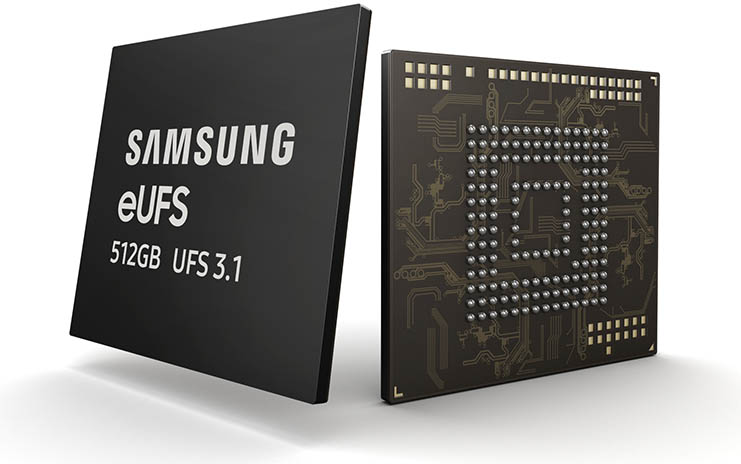 How the new eUFS chip improves upon its predecessor

In its press release, Samsung claims that the 512GB eUFS 3.1 storage chip is the first of its kind, in terms of speed and power. The chip is capable of attaining a write speed of more than 1,200 mbs, which is three times faster than what its predecessor, the 512GB eUFS 3.0, can do.

At that speed, the process of saving big files, such as a large number of high-resolution images or 8K video files, in mobile devices can be compared to doing the same using an ultra-slim laptop.

Samsung was also quick to note that its 2020 storage chip offering will only take around a minute and a half to transfer 100 gigabytes of data. With the previous eUFS 3.0 chip, the transfer time is about four minutes or more for the same amount of data.

“With our introduction of the fastest mobile storage, smartphone users will no longer have to worry about the bottleneck they face with conventional storage cards.

“The new eUFS 3.1 reflects our continuing commitment to supporting the rapidly increasing demands from global smartphone makers this year.”

Looking ahead later this year

Apart from the 512GB eUFS 3.1 storage chip, Samsung has also announced that it will be manufacturing 128GB and 256GB options to be used for flagship devices from other phone maker brands expected to hit international markets during the second half of 2020.

As for the 512GB option, there’s no official word yet regarding which particular flagship device from Samsung will sport the storage chip later this year. But many are already betting that it’s gonna be the Samsung Galaxy Note 20, and quite possibly, the Samsung Galaxy Fold.