Sea of Thieves is coming to Steam on June 3, a full two years after its launch on the Microsoft Store.

The multiplayer adventure on the high seas will allow its players to carry over their progress. According to Rare’s announcement,

they “look forward to onboarding a whole new community of PC players.”

With 10 million players sailing, the future is bright for many salty seadogs of Sea of Thieves. The world is wide, blue, and full of booty to plunder. Before the adventure, players need to learn how to move their progress.

Before players can start conquering the high seas, the game has a few details that newbies need. 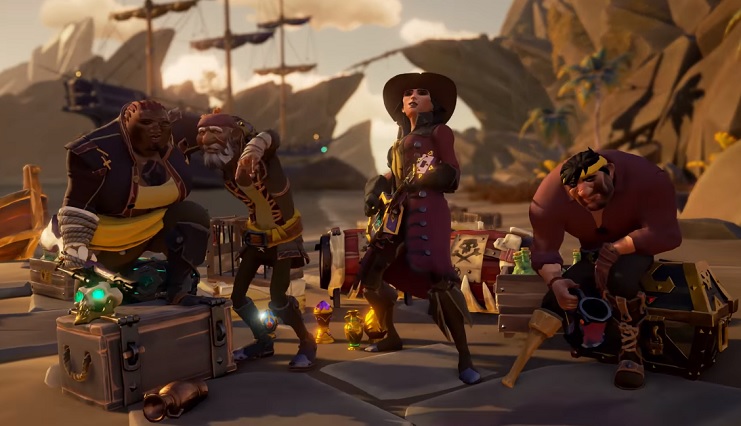 For new players who want to enjoy seafaring and plundering, they would need an Xbox Live account. Players would then need to log into their account or create a new one. Players who will play the Steam version of SoT won’t need Xbox Gold for multiplayer.

The game is only available for PC, but the game has crossplay between Xbox One and all PC versions. If a player has some progress on their Xbox Live account, everything will show up on Steam.

These will also unlock similar achievements in the game. Players can get all their ranks, cosmetic items, and any currency left over.

“Sea of Thieves will be opening up the virtual pirate life to more players than ever before by sailing into brand new territories,” said the Steam announcement. “Sea of Thieves is the biggest new Xbox IP of this generation, and we’re proud to be forging on through uncharted territory with a wave of new Steam players incoming and even more feature-packed updates on the horizon!”

Sea of Thieves is among the most fun games now that several updates came to it. Back in 2018, the game received wide criticism for lacking much content. According to Erik Kain, the game feels “incomplete” two years ago.

Kain noted how much the game “feels like an Early Access” game. This created a widespread panning of Rare’s newest game. Now, two years later, the game has more content with The Hungering Deep and their Anniversary Update.

The most recent release was Ships of Fortune in April, which made it more worth players’ time. Players can enjoy pillaging with friends online, with a smoother experience and more streamlined gameplay.

Sea of Thieves will be available on June 3 for $39.99, with many enjoyable adventures in store for the newest landlubber.

When too much news is bad news: is the way we...

Keanu Reeves reveals how music helped him ‘get through worse’

‘Death At Sea World’: The gut-wrenching drama starts production in 2021