Second Extinction is a brutal, merciless take on dinosaurs on the Xbox Series X. This coop survival FPS has players warring against an endless wave of mutated ancient beasts.

Systemic Reaction announced the game in today’s Inside Xbox presentation. The game is ready for Xbox Series X and also available in PC via Steam.

Second Extinction comes with a torrent of games announced for Microsoft’s new platform. Other games titles in the list include The Medium, Call of the Sea, and Scorn. Many of these titles will come out as launch titles for Microsoft’s ninth-generation console.

This dinosaur game is intense and unforgiving. It’s almost a combination of Turok, Left 4 Dead, Evolve, and Generation Zero.

The game follows a group of survivors who returned to Earth. In this story, mutated dinosaurs almost hunted humanity to complete annihilation. It’s the players’ job to take back the planet with an array of weapons and abilities.

The game comes in a three-player coop, which takes from Generation Zero and Evolve. Teamwork is key for the game, as the dinosaurs are relentless. They can easily overwhelm three-man teams with ease.

Extinction players can change the tide of war

If players hope to progress within the game, they need to know what they’re fighting. Teams will look at electric raptors and super-sized T-rexes much more sinister than the ones in movies. 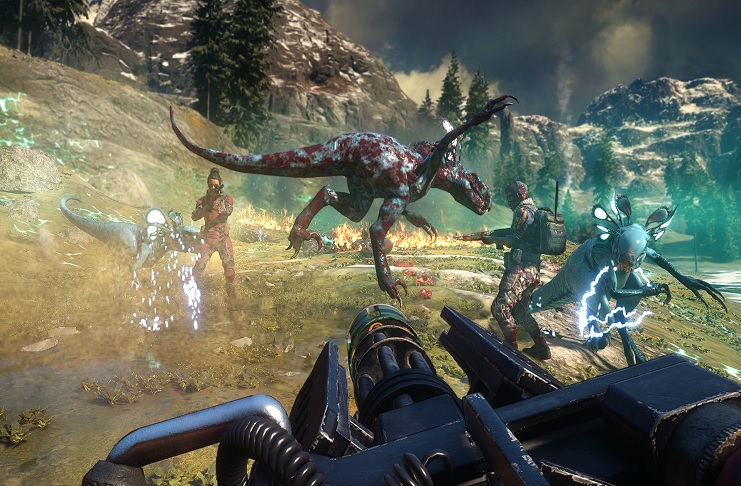 Humanity in extinction fled to outer space, and from there, they try to do precision strikes against the slithering reptiles. There’s none of that worn-out double-barrel shotgun for players. Instead, warriors will every armament will “explosive results against overwhelming opposition in challenging set piece engagements.”

The outcome of the game depends on how other players do online too. The devs plan to make a long-term live game that changes the world over time. This process is reminiscent of the Social Strand System from Hideo Kojima’s Death Stranding.

In Death Stranding, the players will receive aid from unknown players online. These come as changes into the landscape, which helps them carry on.

“Earth is overrun by mutated dinosaurs,” THE STEAM PAGE notes. “Team up with up to two other resistance fighters to take it back in short but intense combat operations.”

Second Extinction is the dinosaur game of the decade, and it’s a powerful experience players should give a try.