On September 18, crypto traders in New York will find themselves sitting on the sidelines as Binance.US officially opens for business in the United States.

In a blog post yesterday, Binance stated that its U.S. platform will be open for registration and deposits of a limited number of crypto assets beginning on Wednesday of next week.

Residents of the state of New York will not be able to use the platform, however, since Binance does not have the required BitLicense which is required to operate in the state.

Aside from New York, it is not clear yet which other states – if any – will also be excluded from trading services since each one has its own version of the law in the minefield of regulation that makes running a crypto business in the US so difficult.

Earlier this year, Binance announced that it would be banning U.S. customers effective today, September 12.

The ban was due to mounting regulatory pressure and general animosity towards the industry from U.S. lawmakers.

Through its partnership with BAM Trading Services, Binance will be able to operate in the U.S. with full regulatory compliance.

Former head of XRP institutional liquidity at Ripple, Catherine Coley, was hired by Binance in July to head the U.S.-based exchange as its CEO.

The company has stated that this is the first phase in an expansion of products across America.

This kicks off our first phase!https://t.co/wfAREA0TYR

Binance.US will be based out of San Francisco but the exchange is headquartered in the crypto-friendly island of Malta in the Mediterranean.

It also has physical locations in Jersey (UK), Singapore, Hong Kong, and Uganda to serve local markets there.

Unlike its flagship platform, users of Binance.US will be required to comply with full KYC requirements in order to trade and withdraw funds from the exchange.

In order to set up an account on the exchange, customers will have to upload a copy of a valid government-issued ID (e.g. driver’s license or passport) and provide their social security numbers.

Which cryptocurrencies will be listed?

Initially, only six cryptocurrencies will initially be available on the exchange, and they are Bitcoin, Ethereum, XRP, Bitcoin Cash, Litecoin, and Tether.

The company added that it will continually add more digital assets for trading on the U.S. platform using a Digital Asset Risk Assessment Framework to determine which ones are worthy of listing.

Last month the exchange announced that there could be as many as 24 cryptocurrencies in addition to the current six listed. 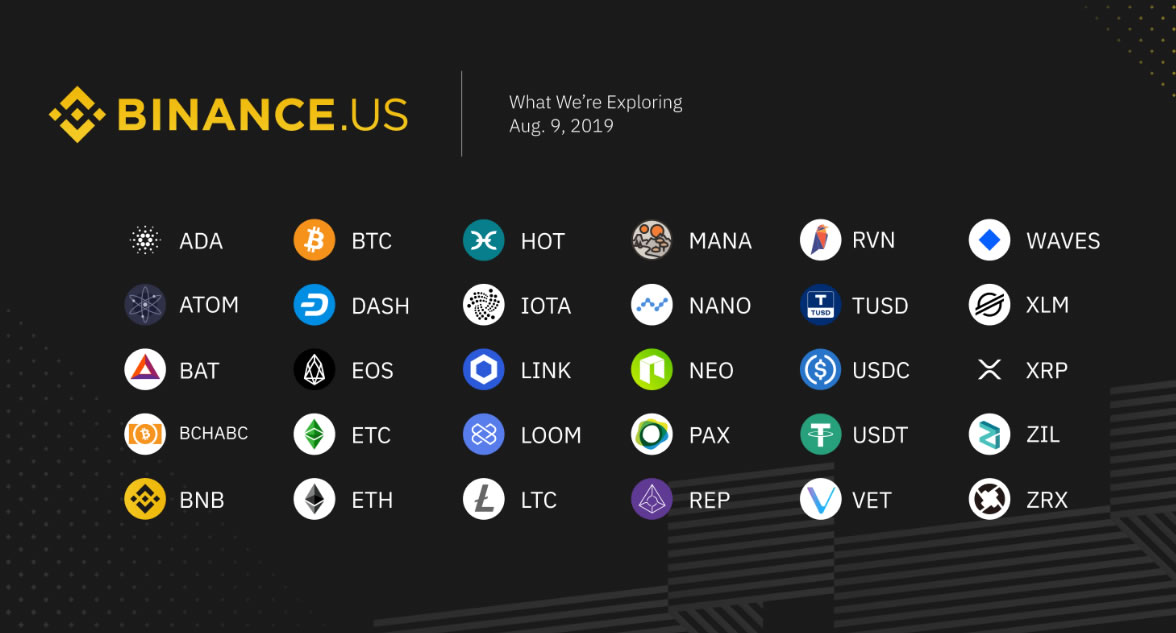 One concern which has been raised by traders, however, is the initial exclusion of BNB which the exchange has pushed no end this year and uses for pretty much everything.

There is speculation that there could be a resulting mass liquidation of BNB as users move over to the U.S. platform.