Prominent Bitcoin advocate Andreas Antonopoulos inadvertently ignited a firestorm of criticism and debate after a simple request for suggestions from his fans drew accusations of discrimination.

In an effort to “reach out to a broader audience,” Antonopoulos recently asked his Twitter followers about what podcasts would they like him to appear on.

He specified that he wanted his listeners’ suggestions, rather than those of people promoting the podcasts.

What podcasts, shows and interviewers do you enjoy?

Are there any that you would like me to go to? Some that I haven't done before? I'm looking for suggestions.

Based on the flood of comments on his Twitter post, Antonopoulos proposed that after having covered all the ”white male podcasters,” it was time to broaden the spectrum and help create an equal and more diverse environment.

“I think we’ve covered almost ALL the white male podcasters I should visit.

How about some other shows?

Not American, not investment/finance, not men, not white. I can’t change me (I’m many of the above) but we can change the other side!” 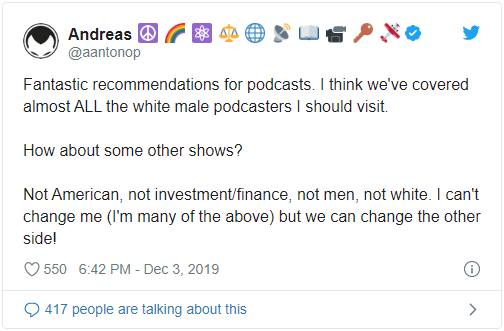 Antonopoulos explained that the factors had come into the picture only after he went through the suggestions, which mostly had a pattern of not including enough “not American, not investment/finance, not men, not white” hosts.

After responding to almost all the comments on this triggering post, he explained that he was “honestly open to recommendations of all kinds. I got more than 30 recommendations and several invitations before I noticed the pattern.” 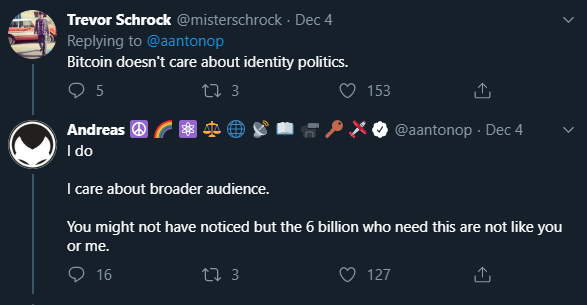 “Sent you an invite to @TaoAmandaLIVE. Last time I checked, @AmandaB_Johnson is a woman!”

Declining the offer, Amanda Johnson, Carruthers’ co-host, said, “Sorry, Tao, I’m not interested to interview anyone one our show who discriminates on the basis of race and/or gender. That’s a pass from me.”

Sorry, Tao, I'm not interested to interview anyone one our show who discriminates on the basis of race and/or gender. That's a pass from me.

Urging people to “react in a constructive way,” and not respond to trolls, Antonopoulos said that although it may seem otherwise, he was supported by the people who didn’t want to deal with “over-privileged complainers” who don’t understand what it is to be on the other side.

“Don’t for a moment think that the tiny tiny minority of loudmouth people who screamed at me are the majority of the community in crypto.

My DMs are full of supportive messages from those who do not want to engage with the over-privileged complainers.”

He said that there were several “nice new people who care about diversity in crypto,” reached out to him.

Antonopoulos added that even though he loves everyone, it does not mean he values everyone’s opinion equally. “Some opinions are like assholes. Everyone has them, they stink,” he said.

A woman who claimed to have been introduced to blockchain by Antonopoulos thanked him for standing up for his opinion despite the questions raised.

Antonopoulos posted a screenshot of the message she sent to him, which detailed that as a woman in the field, she also faces problems in the male-dominated, entitled crypto world and that his giving voice to such problems is commendable.

“99% of the people I deal with are male, white, entitled and unnecessarily aggressive”.

I can’t tell you how often I hear this. I hear it because I have made it clear that I am listening, so people speak to me.

If you think that’s “merit” you’re a sexist. pic.twitter.com/uJyiQqIFgp

In a trolling response to Antonopoulos’ “Not American, not investment/finance, not men, not white.” comment, one Twitter user joked:

My friend Obunga Mopuutu has a podcast about collecting coconuts in Fall River Massachusetts pic.twitter.com/Z3d0MG5Soe

Antonopoulos replied that the discussion was not about a race or gender, but about meritocracy.

“Spend a day in my mentions and DMs, wading through white supremacy and misogyny filth and tell me again.

Oh how nice meritocracy would be. These mediocre douchebags would be out,” he said.

This is not the first time Antonopoulos has been vocal about his opinion on social justice.

In February, he expressed disgust over the objectification of women in crypto conferences.

Referring to “booth babes” – attractive, provocatively clad young women hired for marketing and to attract the male attendees’ attention – Antonopoulos said that just because objectification sells, it doesn’t mean it should be tolerated.

Additionally, his speaking agreement contract specifically mentions, “no strip clubs, no exotic dancing, no pool parties, and the Organization shall require sponsors, vendors, and exhibitors to be dressed appropriately for a professional event (e.g. no “booth babes”).”