Sophie Turner and Joe Jonas tied the knot twice last year. After surprising fans and supporters, reports said that many individuals had deemed them as the ultimate epitome of “couple goals.”

It was not until a few months later when they became the center of pregnancy rumors. But, while they have not spoken about it, their photos and appearances became pieces of proof that none of the reports were true.

Earlier this year, the pregnancy rumors further strengthened its position. A source then, later on, told Just Jared that Sophie Turner and Joe Jonas are, indeed, expecting their first child.

Despite the good news, the celebrity couple has remained quiet about the matter. As explained, they are keeping things “very hush hush.” Nevertheless, their family and friends are “super excited,” the source added.

Another source reportedly told the publication that the Game of Thrones actress had chosen outfits that will “accommodate” her “changing body.” The publication then noted that since the emergence of the claims, the celebrity has always chosen to wear big coats and hoodies.

A walk with Joe Jonas

Amid the lockdown in the United States, Sophie Turner and Joe Jonas have since appeared to observe the social distancing guidelines. While they continue to self-isolate in their home, they still reportedly go out for walks together. 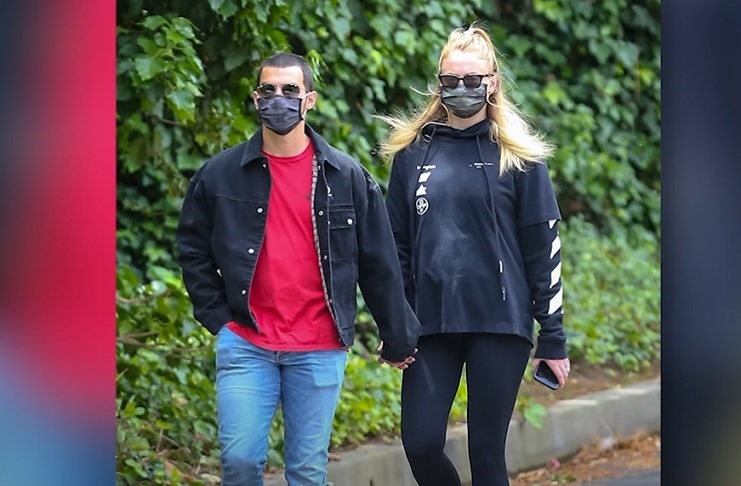 On May 13, the celebrity couple “ventured outside” for some fresh air, according to Cosmopolitan. They reportedly went on a walk around the neighborhood while they wore face masks and sunglasses.

Several photos emerged, showing Sophie and Joe. Although fans were happy to get a “glimpse” of the two, several individuals, instead, focused on the actress’ “growing baby bump.“

Many publications released a similar narrative. As claimed, this outing just seemingly “confirmed” their pregnancy.

Memorial Day outing at the beach

On Memorial Day, several celebrities have appeared to have marked the day with their trips to beaches. These personalities reportedly include Sophie Turner and Joe Jonas as they spent the day “perusing” the Santa Barbara coast, according to Harper’s Bazaar.

The X-Men star reported donned a huge hoodie and a pair of shorts. Her socks on a sandal even caught the eyes of many critics, again, as per claims. But, what truly caught the attention of many is that Sophie’s baby bump has become quite bigger.

Several photos emerged the following day. Based on the photos, reports said that Sophie Turner and Joe Jonas no longer need to confirm the pregnancy as it has already become apparent.