In a nutshell, SpongeBob SquarePants: Battle for Bikini Bottom Rehydrated looks like a “ground-up remake” of its 2013 predecessor. Forbes describes it as a “near-identical” to its PlayStation 2 release.

For those who are doubtful about the Nickelodeon animated series-based game, the media outlet does assure that this “remake” rates well:

“As far as faithful, ground-up remakes of older games go, this is the most clear-cut success I’ve seen in years–but for all its positives, it still shows its age.”

Stayed true to its loved storyline

One of the great things that are worth pointing out is that SpongeBob SquarePants: Battle for Bikini Bottom Rehydrated stayed true to its classic loved series storyline. This means that Plankton is still the main villain.

Also, the series of adventures still revolve around the things that the avid fans know well about Spongebob and his friends—bubbles, jellyfish, and Plankton doing what he does best.

According to Nickelodeon, the official game synopsis reads:

The cult classic is back, faithfully remade in spongetastic splendor! Play as SpongeBob, Patrick and Sandy and show the evil Plankton that crime pays even less than Mr. Krabs. Want to save Bikini Bottom from lots of rampant robots with your mighty bubbles? Of course you do! Want to underpants bungee jump? Why wouldn’t you! Want to join forces in a brand new multiplayer mode? The battle is on!

Sony’s trailer drop let its audience absorb a decent amount of gameplay and game quality—enough to fire up players’ imagination back again, especially to the now adults who grew up watching the yellow sponge’s under the sea shenanigans.

Basically, SpongeBob SquarePants: Battle for Bikini Bottom Rehydrated aims to be played with friends or siblings.

Players are not limited to playing the loved yellow sponge protagonist but his friends, like Sandy and Patrick, can be used as well. In fact, the characters are equipped with unique sets of skills.

There’s also a horde mode multiplayer that can, fortunately, be played either online or offline. The MP mode can be played up to two players.

This is where one of the nostalgia moments kicks in, remembering Sandy and Spongebob karate face-off moments. Of course, Spongebob always didn’t stand a chance, but this game might finally change that fact. 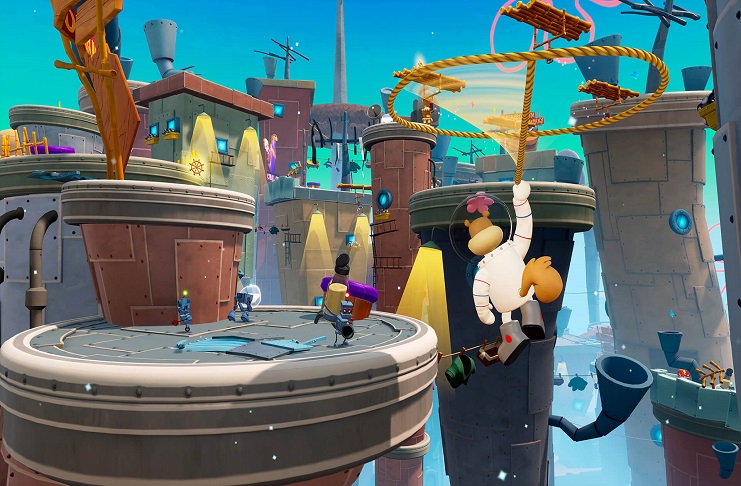 In addition, there are “restored contents” from the original 2013 game that didn’t make it to the final game then. One of which is the Robo Squidward boss fight.

But is the game worth getting just for the sake of nostalgia? Well, the reviews are not as exciting as many may expect. There are reports about the lack of a coherent story and the presence of in-game bugs.

Here’s to hoping that follow-up updates will likely fix that. Meanwhile, the game is being made available to Nintendo Switch, Xbox One, PlayStation 4, and PC.

Yes, street art is on public display — but that doesn’t...