Stellaris is on its fourth anniversary, and a celebration is on its way. The 4X sandbox game will be free this week on Steam, together with an exclusive update.

Paradox Interactive’s massive space sandbox released in 2016. Stellaris is a young game when measured by galactic standards, but it’s old by internet standards. As thanks to the fans, Paradox will add a visual update that freshens up the gameplay.

The update, named “2.7 Wells Fourth Anniversary Update”, creates extensive patches to the game. From now to May 17, the game is free to play so players can enjoy and decide if they want it.

The entire space game is almost not the same compared to its 2016 iteration. So many of its downloadable content expanded so much of the gameplay. Much of the changes, however, veil behind the many DLCs.

These downloadable content are not available for free play this week. Even then, a lot of the good stuff are into the base game for Stellaris. Players can explore universes, build their own worlds, and employ galactic wars.

For old players who are coming back, this Paradox game is due for a replay.

The Federation expansion also added galactic communities that open discourse for the future of a galaxy. The new content breathed life into the game, creating a 64,000+ peak player count in March.

The new update has not only sharpened the visuals for gameplay. The anniversary patch added unique systems for its hostile creatures. Resolutions for galactic communities added up, together with joint operations and edicts.

Fans who want more details can look at the patch notes. The entire list is not only extensive but it’s also super detailed. The new balance patches can also change the current-metagame. 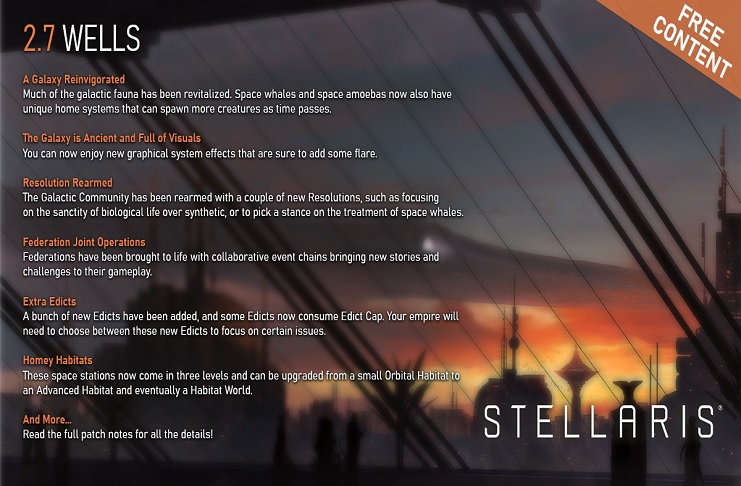 Some game choices patched out, many of which embrace more pacifist gameplay. The AI also underwent changes that helps make its play more viable.

The entire game is not only available for trial until 17, it’s also on sale. The base game, Galaxy Edition and almost all DLC are on sale. The sale goes from anywhere between 25% and up to 75% for some.

Stellaris is an excellent 4X RTS game that is as legendary as Sid Meier’s Civilization. For new players, it’s best to take advantage of the trial and see if the game is up to their standards.