Steve Harvey is not leaving Hollywood even after NBC canceled his show.

The Steve Harvey Show host is reportedly turning his back from Tinseltown after the cancelation of his program, but the claim was not true at all.

National Enquirer claimed that Harvey is raging and smarting after NBC canceled his daytime show. He had a successful crew when he was in Chicago, but he left them to be in Los Angeles. Unfortunately, he allegedly felt Hollywood was not for him.

Harvey is reportedly considering moving to Georgia. Also, he allegedly wants to film the majority of Family Feud there. However, his wife Marjorie loves LA.

“Now he’s come back with his tail between his legs! He’s been telling pals the Hollywood crowd just wasn’t for him and he didn’t click with the TV people out there. Marjorie enjoyed the lifestyle and the sun, but it was never quite Steve’s taste,” an insider said.

Gossip Cop debunked the claims. The tabloid noted how Steve revived the show via Facebook Watch earlier this year.

Furthermore, Steve has been filming in Tyler Perry’s studio in Atlanta, but it doesn’t mean Steve Harvey is leaving Hollywood. 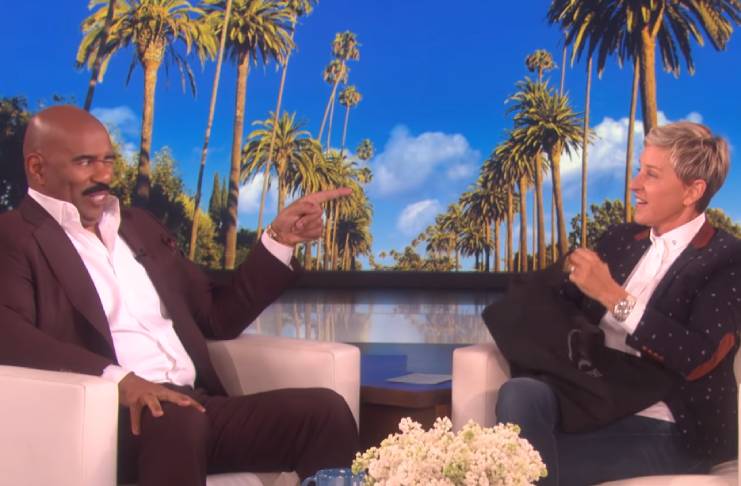 According to Variety, the end of Harvey’s show raised questions. Some were wondering if the show was just a casualty of the animosity between NBCUniversal and Endeavor’s IMG Original Content over the latter’s takeover of the show two seasons ago.

The Steve Harvey Show was co-produced by Endemol Shine North America and NBCUniversal. It started in 2012 and after a five-year deal Endemol, Harvey cut a deal with IMG to produce a new version of the show. They rebranded it to Steve and relocated from Chicago to Los Angeles.

The NBCUniversal executives were reportedly furious that they lost their stake in Harvey’s show after the transition to IMG. Thus, it wasn’t a big surprise when NBC cut a deal with Kelly Clarkson to replace Steve’s time slot.

How Steve Harvey reacted after his show was canceled

Steve Harvey was upset about the changes. According to him, he thought he would be staying with the network.

Unfortunately, they informed him that they were giving the time slot to Kelly Clarkson. He wasn’t sure of the real reason. He also wished they were nicer when they approached him.

“I’m just an old school guy, and I just thought that you’re supposed to just talk to people and just go, ‘Look, you’ve been good business for us. This is what we’re thinking of doing, are you okay with that?’” Harvey said.

“No, you just don’t put something in the paper and say, ‘I’m just going to make this move right here,’ because it’s crazy.”

Microsoft Teams and Office 365 service outage, what really caused it?