The oil market was rattled after Saudi Arabia, the world’s oil giant, announced a voluntary production cut this week.

In light of recent events speculated by some analysts, it looks like the oil market has something to look forward to. With the recent announcement of Saudi Arabia to slash its oil output from June 1, oil dropped to more than two percent.

However, as per Bloomberg, the demand for oil seems to have emerged once again. In addition, countries start to lift their lockdowns this week amid the coronavirus pandemic.

Is the oil nightmare starting to fade?

After the negative crash in the oil futures last month, volatility for the next couple of weeks may become the “new normal” for the oil markets. The countries interested in easing their lockdowns could also be a factor for oil demand to pick up once again.

“The risk of tank-tops at the global level has dissipated, as the pace of the crude stock build has already peaked.”

In Asian territories, such as India and South Korea, oil storage has already been exhausted. However, in other locations, oil tankers are being utilized as floating warehouses to cushion the oil oversupply.

Prices for the last two weeks have rebounded indicating a hint of recovery in the oil markets after the U.S. government agreed to lower its output forecast for the year.

However, oil is still down to more than 50% this year with uncertainty about when global consumption will fully stabilize. 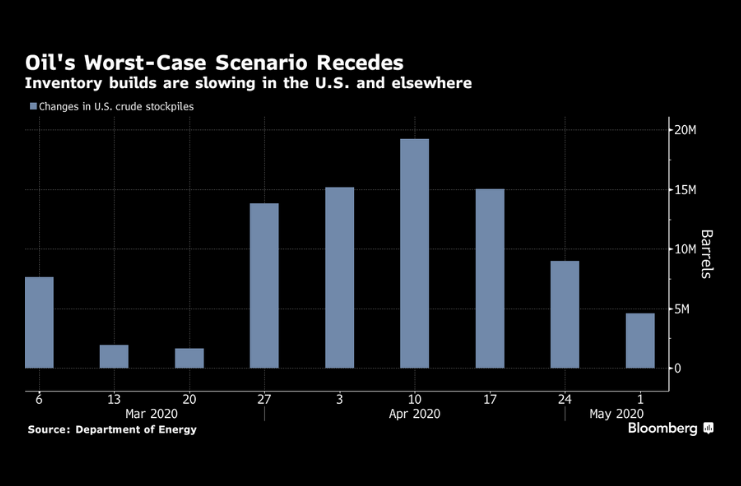 OPEC: Oil cuts to the rescue

The recent moves this week by the OPEC members just goes to show that they are doing everything in their power to put oil prices back to its normal levels.

Following the oil giant’s announcement, UAE and Kuwait followed suit in cutting its supply as well. This is on top of the agreement settled between OPEC and its allies to lower its oil production.

Helima Croft of RBC Capital Markets observes that the OPEC heavyweights are trying to rebalance the oil markets as countries try to ease their lockdowns. However, if the second wave of the coronavirus cases takes a toll in the entire world, a drastic change in trajectory could affect the oil markets.

As of this writing, there are now over 4.2 million cases of coronavirus cases around the world, as per Johns Hopkins University data.

Investors shall see in the coming weeks if the oil markets would play a big part in stabilizing the global economy.