Home Blockchain Survey predicts $1m Bitcoin by 2030 – but how likely is it?

Almost half of respondents to a recent poll tipped the Bitcoin price will hit $1m before the end of the decade. But is it realistic?

Financial markets analyst Mati Greenspan polled his Twitter followers a couple of days ago and was staggered to discover that half of them believe Bitcoin is headed to $1 million in the next ten years.

“Even if we account for the overwhelming sampling bias inherent @twitter polls, it’s still a staggering number,” Greenspan tweeted about the results.

Leaving aside the fact that: a) Twitter polls are as scientific as homeopathy, b) that less than 3000 people took part, and c), that 25% of them answered ‘what’s a dollar’? the results aren’t actually that surprising.

Plenty of crypto pundits genuinely do believe the Bitcoin price will hit $1 million – but does logic and mathematics support such a whopping 13,600% increase on today’s price?

Nearly half of respondents believe that #Bitcoin will be more than $1 million by the end of the decade.

Even if we account for the overwhelming sampling bias inherent @twitter polls, it's still a staggering number. https://t.co/8vxuLCVhvK

The two most famous $1 million price predictions are John McAfee’s and crypto analyst Plan B.

McAfee seemingly increases his prediction at random. It began at $500K, doubled to $1m and now he’s talking double that.

“Run the f***ing numbers,” he said in October. “If Bitcoin is less than $2 million by the end of 2020, then mathematics itself is a flawed disappointment.”

So his ‘predictions’ are probably just hyperbole. 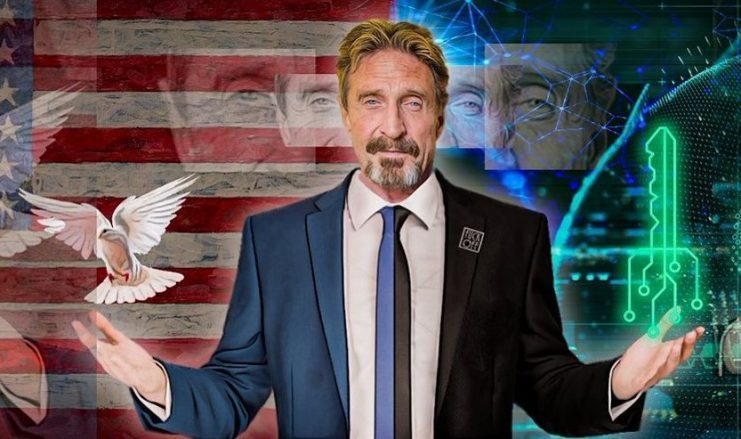 However his model only looks at the supply side, of Bitcoin’s increasing scarcity due to the block reward halvings.

It’s been criticized because there’s no guarantee there will be an accompanying increase in demand. That’s not to say Plan B is wrong, just that it doesn’t model all of the variables. He does think ‘greed and fear’ will play a role though in demand.

But halving events haven’t been shown to have any predictable or uniform effect on price.

Stock-to-flow model predicts the long term trend, and greed & fear cause the actual bitcoin price to dance around this trend. #cointegration pic.twitter.com/k5oL7lCYqM

Other pundits and their reasoning

He thinks Bitcoin’s path to $1m will be because it overtakes the $8 trillion market cap, and popularity of gold as a store of value.

This is a popular thesis, especially as millennials have shown a lot of interest in cryptocurrencies, and very little interest in gold.

The head of Grayscale recently said that $68 trillion of wealth is being handed down to millennials – and there’s already data they’re spending it on Bitcoin.

Former hedge fund manager Jame Altucher also predicted a $1m price in 2017 and doubled down on the prediction mid last year – but only with the proviso Bitcoin replaced paper currency.

“So that could give bitcoin a price of $8 million dollars, so $1 million dollars is even a discount to where bitcoin could eventually go. When it gets there, who knows,” Altucher said.

Altucher’s figures on the amount of paper currency seem high, but even if he is right, Bitcoin faces an uphill battle to overtake paper currency.

It’s well known scaling problems only allow for a few transactions a second, so without some serious technological developments it’s not going to be able replace paper currency any time soon.

The Lightning Network may help, but with only a few million locked up on the network and ongoing security issues, it’s a long way off mainstream use.

There are improvements coming, including the ability to send larger amounts of BTC over the network, which should help.

What would a $1 million BTC price mean?

Depending on how many Bitcoin are lost a $1 million BTC price would mean a market cap of $15 trillion to $18 trillion.

To put that in perspective, it’s about half of all of the money in circulation (according to Marketwatch) and not far off the entire Gross Domestic Product of the United States.

It would make Bitcoin the most popular base money on the planet, twice as popular as gold.

So while it’s not impossible it also doesn’t seem likely to account for that level of wealth any time soon.

But if it hangs around long enough however, Bitcoin will probably hit the magic figure.

Thanks to inflation, $1 million will be worth progressively less and less over the years, while Bitcoin’s fixed supply means its more likely to hold its value.

On current figures, thanks to the ever decreasing buying power of USD, one Bitcoin will be worth $1 million by 2250.