The Riksbank is testing its proposed central bank digital currency (CBDC) e-krona together with Accenture. The e-currency was proposed as a technical solution for the decline of cash.

As stated in a press release on February 20, the pilot project is intended to showcase how a CBDC could be used by the masses.

During the pilot, users will be able to hold e-kronor in a digital wallet, send or receive payments, and make deposits or withdrawals using their mobile phones.

Furthermore, the system allows executing transactions via wearables like smart watches, as well as bank cards.

The tests will run until the end of February 2021 but may extend further as necessary.

Sweden to push for use of digital currencies

“The use of banknotes and coins is declining in society,” according to the central bank of Sweden. This perceived “marginalization of cash” brought to light the need for a state-issued digital currency.

With that in mind, it intends to create a longer-lasting electronic payment system that is safe and efficient.

Riksbank proposed to the Swedish Parliament that e-krona’s use case should be carefully investigated by various experts in different fields. But as of now, there hasn’t been any decision or plan to issue and implement said currency.

The purpose of the pilot is simply to explore the benefits and solutions that a CBDC can provide. 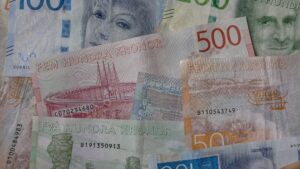 The e-krona project began in the spring of 2017, as conducted by the Riksbank.

“The primary objective of the e-krona pilot project is to broaden the bank’s understanding of the technological possibilities for the e-krona.”

Near the end of that same year, it partnered with Accenture to create the pilot platform that started recently. The currency will be based on distributed ledger technology (DLT), with Corda blockchain to serve as its foundation.

Unlike the Bitcoin network, Corda is a private and permissioned blockchain, which means that the Riksbank fully controls the ledger, and only approved participants can access it.

It might go against the principles of decentralization and individual monetary sovereignty, but that’s how CBDCs work.

A recent report from the Bank of International Settlements (BIS) has indicated that the number of central banks investigating digital currencies is as high as 80%. The same study also implied that most central banks have little to no interest in implementing cryptocurrencies, which shouldn’t be surprising.

Perhaps the most significant report is that of China, which planned to launch the world’s first CBDC but hasn’t yet confirmed a release date.

Amazon’s ‘New World’ is a hit on Steam already!