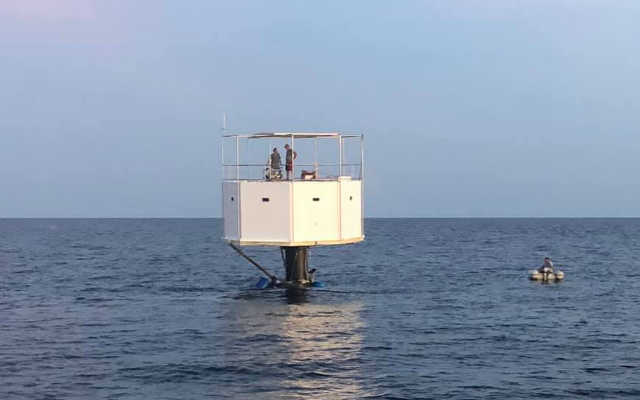 An American Bitcoin investor’s dreams of freedom have turned to nightmares after being accused of violating Thailand’s sovereignty by anchoring his ocean-based home off the country’s coast – a crime punishable by death.

Michigan native Chad Elwartowski and his girlfriend Supranee Thepdet, a Thai national who also goes by the name Nadia Summergirl, are on the run and in fear for their lives after narrowly avoiding a raid on their floating ‘seastead’ home.

According to a post on Elwartowski’s Facebook profile, which has since been taken down, he and Thepdet were warned ahead of time of the raid and fled before authorities arrived.

“This is ridiculous. We lived on a floating house boat for a few weeks and now Thailand wants us killed. We had to go underground because our contact warned us before this came out.”

A successful Bitcoin investor, Elwartowski retired in November 2017, near the height of the market boom that saw Bitcoin prices soar to almost $20,000. He and Thepdet are part of Ocean Builders, a community of entrepreneurs with a passion for seasteading. The home is the community’s pilot project and has been heavily profiled online in the hopes of selling additional units.

A matter of national security

The Third Thai Naval Area Command filed an official complaint with police in Phuket on April 12th, accusing Elwartowski and Thepdet of breaching Section 119 of the Thai Criminal Code. The law states that “any act with intent to cause the Country or any part thereof to descend under the sovereignty of any foreign State, or to deteriorate the independence of the State” is punishable by life imprisonment or death.

Although the couple claims that they simply wanted to live free from government interference, a source in Phuket claims that officers found evidence that led them to believe the couple was engaged in “the setting up of an independent state.”

Speaking to the Thai media on Tuesday, Rear Adm. Wintharat Kotchaseni said that the seasteading home was a challenge to the country’s authority.

“This affects our national security and cannot be allowed,” Kotchaseni declared. He went on to explain that the floating house also posed a potential safety threat due to its location in an area considered to be a shipping lane.

Wednesday morning, Phuket officials confirmed that they have launched a search for the couple. Elwartowski is officially a fugitive of Thailand and has had his passport revoked while Thepdet remains wanted by local police.

According to Immigration Chief Lt Col Kathatorn Kumthien, Elwartowski’s name has been added to Thailand’s immigration blacklist and his “right to stay at in the Kingdom of Thailand has ended.”

Ocean Builders, the company behind the seasteading project, have been in contact with the couple, according to an official statement about the incident:

“Chad and Nadia are safe for now but understand that Thailand is currently being run by a military dictator. There will be no trial if they are caught. They already demonstrated that by being judge jury and executioner of the historic very first seastead.”