Tactical RPG The Iron Oath is set to arrive on Steam in the last quarter of this year. The title also released a gameplay trailer during today’s Summer of Gaming event.

The Iron Oath is a superb party-based tactical RPG. Taking from the likes of Final Fantasy Tactics and Fire Emblem.

Moreover, Curious Panda is now ready to make one final push after receiving a hefty $94,000+ pledge from their Kickstarter campaign.  Also, A new trailer is out to render more information regarding the game’s potential.

Players in Iron Oath take on the lead of a mercenary band in a medieval fantasy world. The world by itself is gritty and super cutthroat, which means the game can be somewhat difficult. Gamers would lead their ragtag band in turn-based combat, with missions that take a toll on the people within the party.

What makes Iron Oath unique is the effect of mission outcomes on the people within and outside the warband. Dawdling around in the game is also not a smart move.

Time in Iron Oath harms the player party. The more years go by, the roster also ages further and can die from old age. Members can grow, weaken, and receive new stories as time goes on.

The world also changes as time goes by, with five regions unique from each other. Meanwhile, there are some biomes that offer many hub areas that shelter the mercenary band.

The decisions players face can weigh on the world around them. Planning and execution can be vital to success. How successful the mission ends will also affect everything else.

“The decisions you’ll face often carry weight, and can have a minor or major influence on your characters and the world that surrounds them,” says the Steam page description. “As the years progress the world changes dynamically, enabling new story-lines and missions which results in a unique experience for every playthrough.”

The Iron Oath offers in-depth management of everything within the mercenary company. Unlike many traditional tactical RPGs that remove much of the minutiae, Iron Oath lays everything in the open. 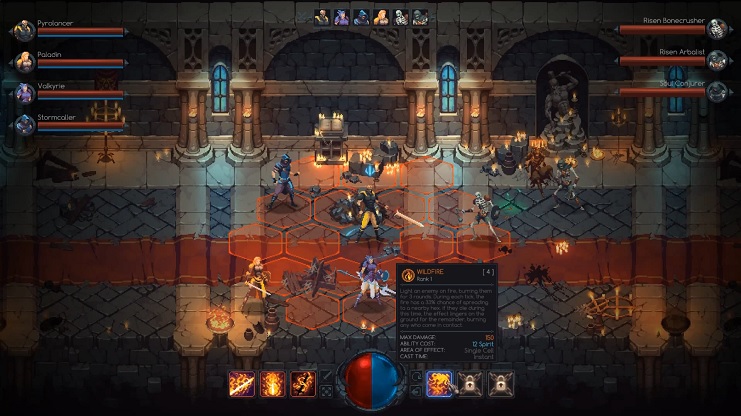 Players can control the company’s finances, work out the roster, and see to everyone’s happiness. Players can create and destroy political friendships, commit treachery, and improve on many facets of the organization.

The Iron Oath will come out sometime this year, likely during the last quarter. The game is under the publication of Humble Games, which is a seal of quality that players can trust.