The new iPad Pro coupled with Apple’s new Magic Keyboard could be heavier than one might think.

Apple had just released a new generation of iPad Pro, and gadget enthusiasts would be delighted to know that it would come with a brand-new Magic Keyboard specifically designed to turn the device into a laptop.

Apple has been using the Magic Keyboard name in all of its updated devices such as the MacBook Pro, MacBook Air, and now the iPad Pro. For the new iPad Pro-specific Magic Keyboard, it comes with three key features.

The first feature is a hinge that gives the user the ability to adjust the iPad up to 130 degrees. This is definitely an upgrade to the previous keyboards that only allow adjustments up to two positions. Not only that, the iPad doesn’t just rest behind the keyboard, the hinge also allows it to float in the air and is able to accommodate many angles.

One of the best features this new Magic Keyboard has would definitely be the trackpad. Because there is a considerable distance between the keyboard and the iPad once it is placed on the hinges, it would seem a bit impractical to continue touching its screen.

With the trackpad and the keyboard, it turns the iPad Pro into something similar to a laptop. Trackpad support for the iPad Pro would come with the iPadOS 13.4 update.

The last key feature of the Magic Keyboard is the USB-C port, which is used to charge the iPad. This port can be found on the hinge’s left side, and this would give the iPad Pro two methods for charging.

Heavier than the MacBook Air

Ever since the product was announced, Apple has not given any clue as to just how heavy the iPad Pro would be once coupled with the Magic Keyboard. Thankfully, a customer who received his Magic Keyboard revealed just how much the keyboard weighed.

Posting on a MacRumors forum, the customer revealed that the Magic Keyboard, together with the 12.9-inch iPad Pro, weighs around three pounds or 1,365 grams. This means that the iPad Pro with the Magic Keyboard weighs as much as the 13-inch MacBook Pro and more than the MacBook Air, which weighs at 2.8 pounds. 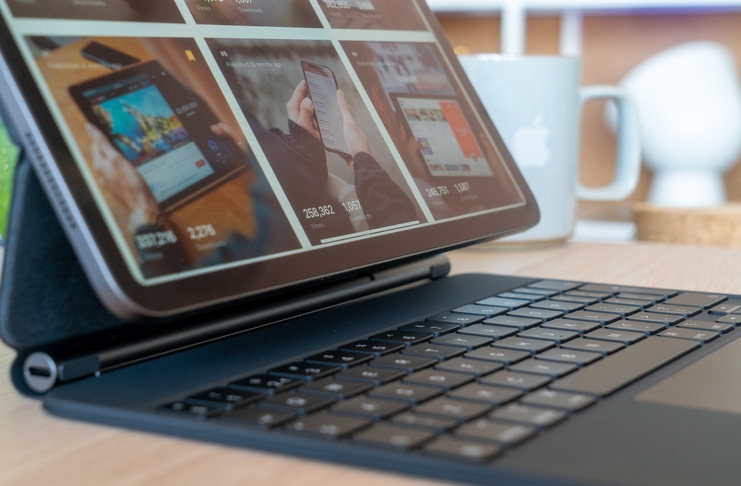 But why is the Magic Keyboard so heavy? The answer is simple. The added weight is needed in order to balance the weight of the iPad Pro as well as enhance the viewing angles.

Pricier than most Keyboards

The biggest downside with the Magic Keyboard would probably be its price. The 11-inch version alone costs around $300, while the 12.9-inch version is priced at $350. The price could be enough to buy a midrange phone and could be deemed impractical in these uncertain times.