Many believe the Bitcoin bull market that peaked in 2017 was a once-in-a-lifetime phenomenon. But an undercurrent of crypto millionaires, influencers and traders are beginning to turn to a relatively unloved and controversial commodity they believe is on the cusp of an explosive bull market. One that could be bigger than Bitcoin.

It’s rare to find cryptocurrency colloquialisms such ‘HODL’ and ‘MOON’ on traditional stock market forums, but anyone following online conversations around stocks linked to this commodity will have seen these appearing over the past few months.

Crypto social media stars, with hundreds of thousands of followers, have started talking about it – they’ve been analysing charts and assessing fundamentals.

Even some experienced traditional investors and institutions believe in this emerging bull market.

So Micky reached out to those in the know, for an insight into the compelling narrative surrounding the sector.

Bitcoin and uranium are worlds apart, so it might come as surprise to discover that Bitcoin millionaires are getting excited about the volatile uranium sector.

But perhaps it’s the volatility attracting the Bitcoin bulls to uranium.

Since the 1940’s uranium prices have cycled through three explosive bull markets.

In the 40’s and 50’s the global nuclear arms race created a ‘uranium rush’ that can be compared to historical gold rushes.

The price of uranium spiked so high, people actually began prospecting for uranium.

The uranium rush lasted for more than a decade, before government stockpiling and global anti-nuclear sentiment ended the bull market and ushered in what would be a 20-year bear market.

The bear market that followed the ‘uranium rush’ ended in the 1970’s.

The 1970’s uranium bull market was driven by the adoption of nuclear power.

During this cycle uranium prices increased tenfold while many uranium stocks returned 100x, but an eventual oversupply and then the Three Mile Island meltdown and the Chernobyl disaster would end the bull market and bring about another 20-year bear market.

Uranium prices bottomed at US$8 a pound in 2001. The price was far below the cost of production and there was barely a mining operation viable.

But in the early 2000’s further supply cuts, coupled with an expansion of nuclear power generation programs in developing countries created the perfect conditions for a huge bull market that proved life-changing for many investors.

Uranium prices exploded, trading at US$130 a pound in 2007 and uranium stocks again provided gigantic returns.

This third bull market was so explosive, it’s been labelled by some commentators as the ‘Uranium Bubble‘.

The global financial crisis would eventually end the parabolic growth, but like the 1970’s bull market, a nuclear disaster was the final catalyst for yet another bear market.

When a tidal wave caused the meltdown of Japan’s Fukushima nuclear power plant, 54 power plants across the country were shut down and other countries also shelved nuclear power expansion plans.

The uranium price crashed and continued to slide and slide, hitting a low of US$18 a pound in 2016. Once again uranium traded below the cost of production. 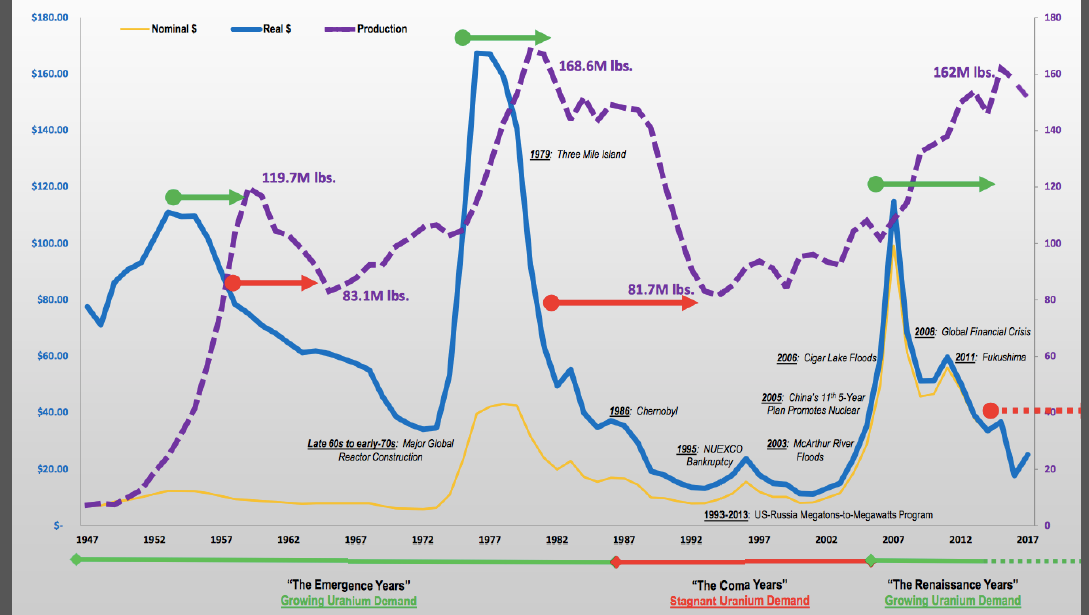 2019: The ‘perfect storm’ for a fourth uranium bull market.

The uranium spot price is currently trading just below US$30 a pound, rising by almost 60% since the 2016 low, but still the current spot price falls far below the cost of production.

At the same time, nuclear power generation is increasing rapidly.

Since the Fukushima disaster, Japan has restarted 9 reactors and according to Cameco, the world’s largest publicly traded uranium company, eight brand new reactors began operating across the globe in 2018, while more than 50 are currently under construction.

Current operating nuclear reactors are relying mainly on the sale of existing uranium stockpiles to continue operating, but those stockpiles are disappearing quickly.

Micky spoke to John Quakes, a retired earth sciences researcher and college professor who now spends his days analysing the Uranium sector and sharing his thoughts with his legion of Twitter followers.

Quakes believes we are currently seeing a ‘perfect storm’ that could result in history repeating and bring yet another massive uranium bull market.

“There is rising demand for clean nuclear energy, especially in China and India where thousands die every year from air pollution brought on by the burning of coal to produce electricity, while many countries around the world are taking another look at adding nuclear power to their energy mix in order to meet carbon emission reduction targets,” he says.

“A new nuclear renaissance is emerging, especially in the field of advanced nuclear ‘small modular reactors’ that can be fairly rapidly mass-produced.

“The increased adoption of electric vehicles is putting new demand on the electric grids of nations around the world, expanding the need for 24/7 reliable high-capacity charging systems powered by clean nuclear energy.

“Capital investment into new uranium mines has been at a virtual standstill for the past many years, providing little new production ready to come online to meet the now rising demand.  Fourteen mines have shut down since 2011 and a fifteenth, ERA’s Ranger Mine, is now into its final closure.

“The stage is set for a major rally in the price of uranium and, I believe, investors will be very well rewarded by positioning themselves now for the bull market emerging and likely to persist over the next few years or more.”

Quakes notes that at the height of the last bull market there were over 500 companies trading in the uranium space, now there’s less than 50.

“When investment dollars begin to flow once more back into this now tiny sector we are likely to see a repeat of the kinds of returns seen in 2007. No guarantees but the probability is now very high.”

Retail investors, the crypto crowd and FOMO could make uranium the ‘next Bitcoin’.

“In the last uranium bull market there was explosive upside in equities.  The largest publicly-traded uranium producer Cameco was a 10-bagger, while smaller names like Energy Fuels were 70-baggers… Those kinds of potential returns in a newly emerging uranium bull market are pulling in a lot of Bitcoin/crypto enthusiasts, especially over the past few weeks,” he says.

“I began to tweet about uranium and nuclear energy back in September 2017 with just 7 followers. Today, 16 months later, there are now over 7300 uranium enthusiasts following me on Twitter.

“That’s still a pretty small following given the size of the Twitter user base, but for such a tiny unloved sector that is an impressive community that has been continuing to grow day by day.”

zoom out and keep it as simple as possible.

something is brewing in the #uranium market ????‍♀️????‍♀️$PDN #uranium pic.twitter.com/jawMT83Hoc

“I noticed a few weeks ago the weekly chart of $URA Global X uranium ETF printed a buy signal for me on the weekly timeframe after a 9 year bear market,” says crypto influencer ‘Benjamin Blunts’.

“This prompted me to look further into the uranium sector as a whole by checking the charts of the uranium spot price and a plethora of international uranium miners and explorers before I found they were all giving me the same signals.”

Micky reached out to ‘Benjamin Blunts’ (his pseudonym) after we noticed some recent tweets on his account about Uranium.

The private investor with 21,000 twitter followers is also the co-owner of a crypto trading advice company known as ‘cryptoinminutes‘.

“I do believe there is slowly more people realising the potential gains to be had from this sector (uranium) although we are still in the infancy of a uranium bull market with little to no mainstream media coverage,” he tells Micky.

“The funny thing about the news is they won’t report on these type of things until the best opportunities to accumulate have already come and gone, but I daresay after a few hundred percent gains the sector will begin to attract a lot more attention, hype and fomo.”

And despite stark differences between Bitcoin and uranium, he says the charts have similarities.

“The biggest similarity I have noticed is the basing/accumulation process for the URA global X ETF over the last few years is very similar in structure to the Bitcoin bottom back in 2015.”

Another Bitcoin bull, turned uranium bull market predictor is Nicolas Merten, who boasts ownership of the number one crypto YouTube channel in the world.

I've currently planning to focus on uranium and silver, but I'll also have some exposure to the broader market of commodities.

“Uranium… It’s a bit like cryptocurrency, it was down 90% after Fukushima, everyone was thinking this is never going to be used and yet I think the US still get 20 or 30%, some crazy amount of power for their homes comes from nuclear reactors,” said Alex Saunders.

“It’s very rare that you get these major super cycles in commodities… Uranium has the perfect set-up,” replied Mertens.

What do you think about the Uranium sector? Join the conversation by following @MickyNewsOz on Twitter and Facebook.

‘UFC 4’ revealed by EA, comes with new features such as...

Android 10 update for the Redmi Note 8 gets a tentative...

Nasdaq blockchain project could mean crypto payments, but not Bitcoin

Why new stablecoins are being developed at a rapid rate